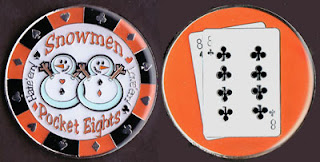 After a late night playing poker at the Choctaw Casino, our crew was back at it Saturday morning.

We met in the lobby at the Hampton at 9 am, enjoyed a quick breakfast, and headed over to Choctaw. Philly Phanatic and I were heading towards the poker room, but a "Monopoly" penny slot machine was calling his name, so I was on my own.

I was seated immediately at a $1-2 NLHE table and quickly surmised that the level of play was going to be higher than the previous day. There were four players there for the Cardplayer Magazine Poker Tour waiting for Day 2 of a tournament that was scheduled to begin at noon. Fortunately, one of them left not long after I arrived and I asked for a seat change to put the better players to my right.

My session began with a run of ugly starting hands, which kept me from losing much money, but was also frustrating. I did get a couple of small pocket pairs in late position, but whiffed the flop both times. My first hand of any significance was pocket aces. I was UTG and raised to $7, getting one customer who was the BB. My opponent bet $10 into a 9 high flop and I popped it to $25, putting him on top pair with a painted kicker. He called and checked  the turn, which was a four that paired the board. I bet $35 and Mr. Pair of Nines called. The river was another 9 and I knew I was a screwed goose duck.

He pushed his remaining $100 and I mucked. He didn't show, but I overheard him whisper to his buddy next to him that he had the boat.

My stack was down to a little over $100 so I bought in for another benji and was glad I did. After dropping a couple of medium sized pots, my stack had dwindled down to around $135 when I peeked down at pocket eights and limped into the pot hoping to set mine. I hadn't hit a set the whole trip, so I was certainly due.

The player to my left, who was average at best, popped it to $12. The player to his left, who was bad, called as did the lady to his left. She was the best player of the three. With all those calls, I felt I had the pot odds to call and if I hit my set I could win a nice pot. The flop was a lovely 8-4-4.

I was first to act and knuckled the table. The preflop raiser bet $15 and got two calls before the action got back to me. If I call here I have a little less than a pot sized bet behind me so I decided to go ahead and shove, hoping one of my opponents had a strong 4 and might call.

Mr. Preflop Raiser moaned and groaned before saying, "What the hell, I came here to gamble." Music to my ears! When the player next to him came along for the ride I got a little nervous. I didn't want to have to fade too many outs. The woman finally folded after going in the tank for 3 or 4 minutes.

One of the better players pointed at me and said, "He's got pocket eights," apparently amazed that he was the only one at the table who had figured that out. Mr. Preflop Raiser tabled pocket aces. I don't know how he could think he was ahead in the hand, but players like him is why $1-2 is profitable. The second caller had the strong 4 (K-4) I was looking for, so all I had to do was fade the two aces left in the deck. I don't remember what the turn and river cards were, but neither was an ace and I dragged in a nice $400+ pot, the biggest I've ever won.

I didn't want to hit and run so I played for another half hour before cashing out with a profit and meeting the rest of the crew for lunch. Tin Man and Lil' Annie Okie headed back to Waco after we ate, but Philly, Ms. Duck and I hung around playing video poker for another hour or so before heading south ourselves.

Everyone seemed to have a good time and I think it's a trip we'll do again in the future.

Till next time, win the flips.
Posted by Lucki Duck at 1:00 PM