I'm jumping on the Cleveland bandwagon.


The Indians send Carrasco (1-1, 1.61 ERA, last 3 starts) to the mound. In his last start he pitched a complete game shutout against the Tigers. The Jays counter with knuckleballer Dickey (1-2, 4.58, last 3). He gave up 4 runs in 5+ innings against the White Sox his last time out. The Tribe has won 12 straight while the Jays have won 10 of their last 14 at home.

Good luck!
Posted by Lucki Duck at 9:17 AM No comments:


There's one game on tonight's docket that looks interesting.

Good luck!
Posted by Lucki Duck at 8:42 AM No comments:


There are two games that caught my eye on today's schedule, one AL and one interleague game.


It's been a good week to be a Cleveland fan. We might as well jump on the bandwagon.

Good luck!
Posted by Lucki Duck at 9:38 AM No comments:

The first half of June picked up right where May left off. After a slow start to my challenge of winning 100 sit and go tournaments in the calendar year, I seem to have hit my stride.

Limited to Bovada for online play, my biggest concern was the length of the tournaments. Blind levels are 10 minutes, which is long for a SNG, and each player has 30 seconds to make a decision on their hand. It's like watching paint dry, waiting for players to act. It sometimes takes 4-5 minutes to complete one hand. Any advantage gained with the long blind levels is lost in the snail-paced play and the tournaments routinely lasted well over an hour.

Beginning in May I started playing their "Super Turbo" tourneys. Blind levels are much shorter, but the player clock is only 15 seconds, so at least there is a rhythm to the game. The tournaments are more entertaining and are completed in around 20 minutes.

After finishing May with 39 wins, I've picked up another dozen thus far in June, putting me on pace to reach my goal.

Posted by Lucki Duck at 5:00 PM No comments:


The match up tonight in the Twin Cities is worth a peek.

Good luck!
Posted by Lucki Duck at 9:00 AM No comments:

Ms. Duck and I got a late start and decided to make the short drive from the Cosmopolitan across the strip  and down Koval to the Ellis Island Casino for an early lunch. We like to take advantage of their steak special, but this day we opted for Metro Pizza, which is located next to the brewery in the casino. I chose a slice of pepperoni and my gal went with the supreme. Add a couple glasses of the home brewed root beer and we were good to go. We sat in front of the brewery and were entertained watching the brew masters checking their product.

We hung around Ellis and played video poker for a couple hours. We hopped in our coach and drove a few blocks to the Miracle Mile Mall garage behind Planet Hollywood. For some reason the garage was more crowded than I've ever seen it, so we had to drive to the fifth level before finding a spot.

Shortly after walking into the mall, one of the "sharks," as my wife calls them, pounced on us, wanting to hand us some type of product that will solve all our skin moisturizing issues.

"Can I ask you a question?" the shark asked Ms. Duck.

"Why, yes," she answered. "And that was it," as she continued walking.

Does anyone find these salespeople annoying? It seems you can't walk more than five minutes without someone sticking something under your nose.

We exited from the mall thru the large glass doors, onto the strip and trekked over to Paris. We strolled through the casino to see if there was anything new since we had last been there. Rather than playing, we chose to walk next door to Ballys via the connecting hallway, which is lined with specialty shops and restaurants. We passed the eating establishment where we met Rob and Lightning for dinner a few years ago and both smiled as we recalled the visit.

We heard that Ballys had redesigned the front of their property and were interested to see what they had done. In years past, we had discussed several times how the area wasn't as beneficial to Ballys as it could be. Apparently, one of their executives overheard our discussion and built a small shopping area. The idea is good, but the execution leaves a little to be desired.

Named the Grand Bazaar Shops at Ballys, the shops remind me of a storage facility. A lot of cinder blocks and tin form small cubicles which are leased to small businesses. There were a few interesting shops and I'm sure Ballys is charging a pretty penny to lease one of these cubicles located on the strip.

Our next stop was at the Linq. What a change from the old Imperial Palace days. It's a fun area with a good vibe. We both enjoyed our walk down the brick sidewalk as we headed towards the huge observation wheel.

After stopping in a couple shops, we made our way into the casino. I strolled to the sportsbook to see if there was anything of interest on their big screens while Ms. Duck played a Dueces Wild machine. I also walked over to see the poker room, which was surprisingly small, but at least they had one.

From there we headed back onto the strip and found ourselves in front of the Flamingo. We hadn't strolled through their garden area in a long time, so we took a few minutes and enjoyed the rainforest setting in the center of the resort. Of course, there was quite a collection of flamingos, and ducks, but we also spotted dozens of koi in the ponds and even a few macaws.

Where else can you see tropical birds and pond fish in the middle of the desert?


We travel out west to the desert to find a worthwhile game.


Greinke (5-0, 1.95 ERA, last 5 starts) goes to the bump for the Snakes. He tossed a complete game shutout against the Rays in his last outing. Los Angeles sends Bolsinger (1-3,5.76, last 4) to the hill. He surrendered 6 runs in 5 innings of work versus the Rockies his last time out. Arizona has won 3 of their last 5 while LA has lost 3 of 4.

Good luck!
Posted by Lucki Duck at 4:42 PM No comments:


It's been a while, but we finally have a game worth betting.

Good luck!
Posted by Lucki Duck at 9:37 AM No comments:


We have three games that look enticing on today's schedule.


Darvish takes the ball for the Rangers. In his only start this season, he held the Pirates to 1 run in 5 innings. Walker (0-5, 7.36 ERA, last 6 starts) gets the nod for the Mariners. In his last start he gave up 5 runs in 4 innings against the Twins. Texas has won 10 of their last 13.

After a slow start in our race to 100 sit and go tournament wins this year, May proved to be our best month of the chase. With 18 wins, bringing our total to 39, we are only slightly behind schedule to reach our goal.

We had focused on the triple up tourneys, but switched to the hyper turbo tournament this month and it resulted in more tournaments played. We spent an average of 70-75 minutes in the triple up structure. The hyper turbo structure brgins with only 500 chips, with three minute blind levels. A typical  hyper tourney runs about 20 minutes. More opportunities equals more wins.

And the challenge continues. 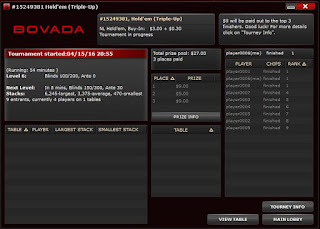 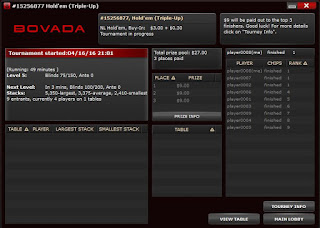 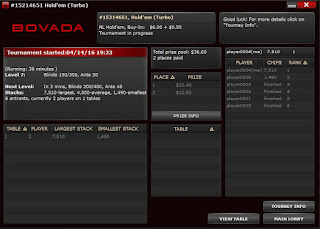 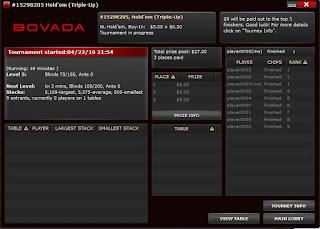 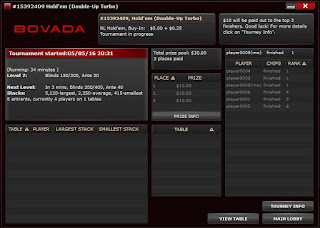 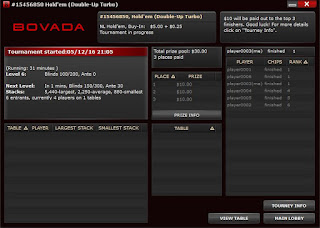 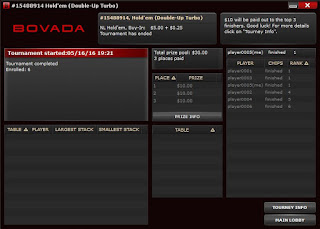 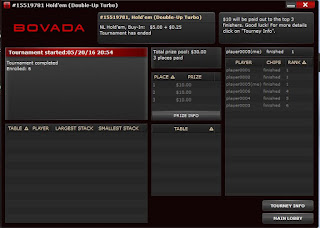 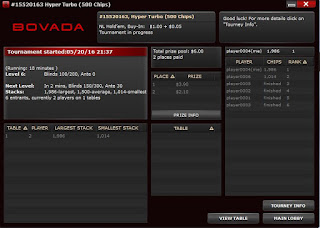 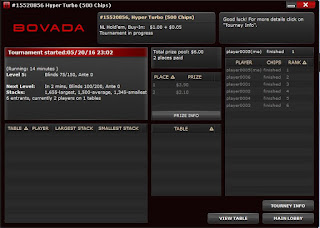 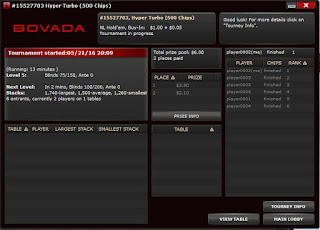 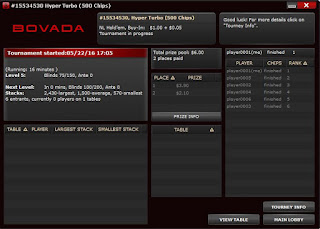 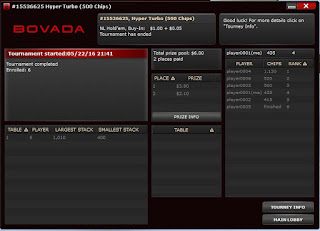 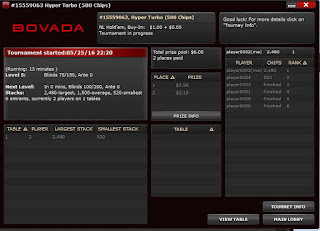 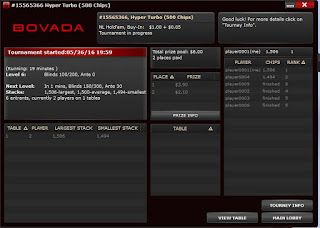 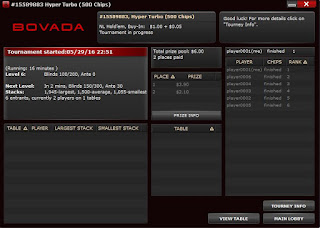 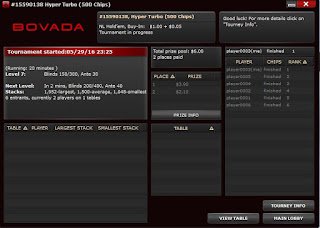 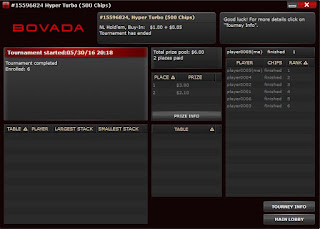