"The Dreaded Pocket Kings," at 4 AM

It was well past my bedtime last night when Hossein Ensan defeated Dario Sammartino in the WSOP Main Event to pocket a cool $10m. 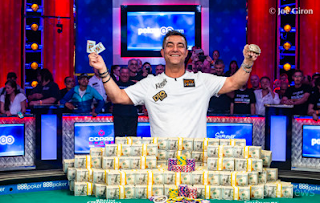 How could we not think of our friend Rob when Ensan turned over "the dreaded pocket kings," as he calls them? All he had to do was fade Sammartino's 12 outs, which he did when a harmless queen of clubs hit on the river.

It must have been an exciting moment, one that very few poker fans saw due to the late hour when it happened, 4 am in Texas to be precise.

Coverage of the final table has been a pet peeve of mine. It seems there should be a better way to schedule it. Currently, the FT is shown over three nights. The first night lasts until three players are eliminated, the second night another three, and the third they play until a winner is crowned (or bracelet-ed). The first two nights do not begin until 9 pm Central, with the final night starting at 8.

Here's a thought; start it earlier. How about 8 pm Eastern each night, that's 5 in Las Vegas. Surely the players can make it to the Rio by late afternoon. Instead of playing until a certain number of players are eliminated, what about limiting play to four hours per night? Even old fogies like me could stay up watch all the hands. And if it takes the FT five nights rather than three to come to a conclusion, who cares?

Wouldn't it be more fun if we could see the final hand live, rather than reading about it the next day?

It would also better promote the game we love.

Congratulations Hossein Ensan, it must have been an exciting moment. Sorry I missed it.

Celebrating a Loss and the WSOP Main Event from "Shakey Town"

One of the requirements when preregistering for a colonoscopy, is stepping on the scale, never a pleasant task. I've always been thin, but had developed a bit of a gut as the years passed by and had to face the truth when I tipped the scales at 188, the heaviest I've ever been. 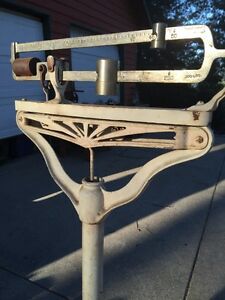 I knew a diet was in order, but Ms. Duck and I were less than two weeks from leaving for Las Vegas. As most of you know, not the best place to start a diet.

I know there are a multitude of different diets these days, Adkins, South Beach, Paleo, etc, but I like to keep thing simple, so I went with my old standby; calories. It's a simple equation, take your target weight, say 170 pounds and multiply by ten. That means you have to limit your calorie intake to 1,700 a day in order to get your weight down to 170. I'm a believer that if you limit your calories, the rest will take care of itself and you'll be eating a generally healthy diet.

Once we returned from Vegas I began. I've always felt my best between 165-170 pounds, so my plan was to limit my calories to between 1,300- 1,500 per day, thinking that would get me there a little quicker. My target weight was 167-168. To accomplish this, I would have to give up two of my favorites, sweets and chips.

I was vigilant, only eating the occasional chocolate chip cookie at our Tuesday night poker game, and have an occasional chip even less than that. By the time I went in for my annual physical in early May, I was down to 181. My blood work came back the best it had been in years, especially my triglycerides, which had always been in the 70-80 range (less than 50 is normal), but this time was down to 50. A little high still, but I was pleased.

By the time we headed back to Vegas for the WSOP last month, I was soooo close to my goal, weighing in a 169. I was worried I would lose some ground while there, but Ms. Duck and I managed to only go to one buffet, always a danger zone. My vigilance paid off and when we got home I weighed exactly the same.

The bad news is that I had plateaued, something everyone who has dieted understands. I weigh on Tuesdays and Fridays, and each time for the last two weeks I was stuck on 169. So close.

Friday morning I stepped on the scale and gave myself a fist pump as it read 166. Yea me!

I need to gain a pound now. Think I'll have some chips!

Have you watched the first few days of the WSOP Main Event on ESPN? I was pleased to see over 8,500 entrants, confirming poker is still strong. I think the most interesting thing I saw was when the second earthquake started shaking the broadcast booth. Lon and Norm seemed a bit nervous, but California resident Maria Ho was undaunted, even giving the boys a hard time about it. Funny stuff. :)

I'm looking forward to seeing more.
Posted by Lucki Duck at 9:48 AM 1 comment:

It was the summer of 2001. My son was 9 years old and was ready for his first year of Little League baseball. He went to tryouts and was drafted by the Davis Brothers Diamondbacks. Davis Brothers was a local printer that was gobbled up a few years later by a bigger company.

The Diamondbacks were in need of an assistant coach and since I had experience both playing and coaching, I volunteered. That's when I formed my friendship with Richard, who was the head coach. It became apparent early in the season that we had an exceptional team and we won the league championship and then won the city championship by beating other league champions in our area.

Richard and I, along with our other assistant coach Rob, stayed in touch through the years, occasionally meeting for lunch and reminiscing about that magical summer and catching up with each other's families.

During one of those lunches, Richard mentioned he was in a fantasy baseball league, the Twin Rivers Baseball League. Formed long before the internet sites began hosting leagues, he said the first several seasons they kept score manually, checking the box scores in the local newspaper. As fantasy websites came to be, they joined the ESPN site, which hosted the league stats for years. This season the league switched to the Fantrax site, so there was a learning curve for us all as we played with the new software. He mentioned several times that if someone dropped from the ten team league, he would extend an invitation to me to join. That invitation came four seasons ago. 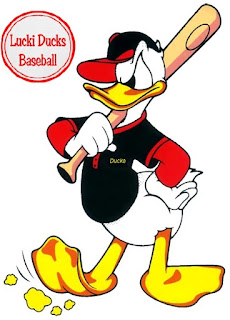 The league values power hitting and consistent pitching. Hitters receive one point per base on hits, one point each for stolen bases, runs and RBIs. There are no points awarded for walks or hit by pitch. Pitchers receive one point per out and lose two points for each earned run. They also receive seven points for a win, four points for a save, and one point for a hold. No points are awarded for strike outs and no points are deducted for walks. Each team has a total of 25 active players per week, with the entire league playing heads up games beginning each Monday and ending the following Sunday. The top team goes 9-0 for the week with the second best going 8-1 on down to the worst team shouldering a 0-9 week.

This is my fourth season in the league. As a greenhorn, I managed to finish fifth my first season . Not the greatest finish, but I did finish in the top half of the league, which meant I got some of the prize money, so I was satisfied. My second season I made a few roster moves that worked out, plus got a little lucky and managed to win the championship! There are a couple teams that have been in the league since its inception 29 years ago that have not won a championship, so I'm extremely proud of that accomplishment. Last season was one of consistent injuries, a major reason I slipped to sixth place.

A week before our draft, which was in late March, each team must submit their list of five player they intend to keep. My five were starting pitchers Blake Snell (Cy Young winner) and Carlos Carrasco, catcher J.T. Realmuto, outfielder Marcell Ozuna and third baseman Nolan Arenado. My thought was Snell and Carrasco would be a strong 1-2 punch at the top of my rotation. Other than the Yankees Sanchez and the Phillies Realmuto, the catching position offered little in the way of hitting, so I felt that keeping Realmoto would give me an advantage at the position. Ozuna and Arenado are both no brainers.

Of the players I drafted this season, the ones that have pleased me the most is the Mets' Pete Alonzo and the White Sox Eloy Jimenez. Alonzo has been raking it this year and Jimenez is heating up after a slow start. My biggest disappointment has been Blake Snell. Between injuries and poor performance, he has become a liability. And Carrasco isn't far behind, posting a pedestrian record and spending a lot of time on the injured list.

This past week I threw in the towel with Snell, trading him, along with starting pitcher Jon Gray and first baseman Jose Abreu. Trading Abreu stings a little, but I was able to strengthen both my bullpen (Sean Doolittle) and middle infield by receiving Eduardo Escobar and Scooter Gennett, who is on the field after being on the IL all season. I will also be able to put Craig Kimbrel on the active roster now that he is closing for the Cubs.

Currently I'm sitting in fifth place, 16 1/2 games out of first. Although it's not where I want to be, it's not as bad as it looks. A big week coupled with a bad one by the leader can gain you up to nine games in a weeks time, but I can't afford to lose any more ground on the Comets. 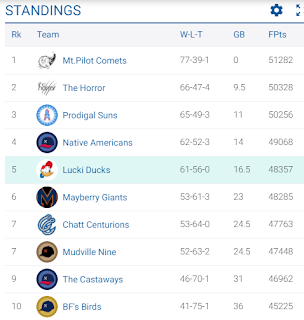 I'm sure there will be a few more free agent pick ups and maybe another trade or two before the season ends. My hope is that Carrasco will get back sooner rather than later and that injuries in the second half of the season will be much less common.

Keep your fingers crossed for a big second half by the Lucki Ducks. 🙂
Posted by Lucki Duck at 10:43 AM 1 comment: