It wasn't pretty, but it was effective.

Entering the final league tournament, Tin Man and I were tied for second in the standings, with Ranger Rick hot on our tails, and both Ray Ray and Stacy within range.

Stamps clinched first place two months ago, leaving just one WSOP seat available. With half the league in contention for the second seat, several things would have to go my way in order to win the trip to Vegas and entry into the WSOP.

The night started well for me as I won a nice pot early with a rivered two pair. Ranger Rick and Stacy both dropped out early, leaving only Ray Ray, Tin Man, and myself in the running. Now that the water wasn't quite as muddy, I was able to focus on my two main opponents. Ray Ray trailed Tin Man and myself by five points, so I set my sights on Tin Man, figuring if I could finish ahead of him, Ray would have to win the tournament to have any chance of catching me. Stamps had also busted early, so we were down to six players.

I lost over 600 chips when I open-raised to 250 from middle position with A-J. I got calls from both blinds and we saw a flop of K-Q-5. Both blinds checked and I c-bet 350. Big Daddy called from the SB and the BB mucked.

We both checked the turn and river and Big Daddy turned over A-Q for the win.

Tin Man and I took turns folding for quite a while, both knowing our next hand could well be our last. He was finally forced to go all-in blind for his last 200 chips and received four callers. If he won he would have 1,000 chips and the luxury of folding for another orbit around the table.

I had 450 chips at this point, so I knew this hand wold probably decide which one of us would win the second seat. Tin Man never looked at his cards, so we would all find out together.

The board ran out 7-8-Q-A-3, with no flushes possible. Ray-Ray showed a pair of eights and everyone else folded. Now it was time for the moment of truth. Tin Man turned over the first card which was a 4.

The second card was a harmless 6, and suddenly it was over.

With fifth place in the tournament secured, it gave me 6 points for a total of 68 on the season. Even if Ray Ray won the tourney, the most he could get was 67 points.

Two hands later I pushed my final 450 chips in with A-4. I don't remember what the board was, only that I lost the hand and finished fifth.

After not winning a seat last year, it'll be nice to play at the Rio once again. 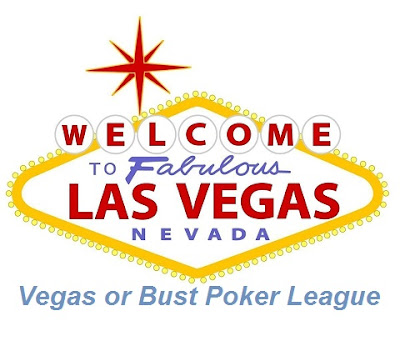 Till next time, win the flips.
Posted by Lucki Duck at 9:43 AM 2 comments: