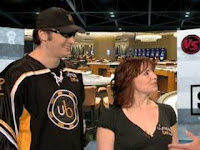 
“Starting a new chapter in my life. Decided to leave UB, but the future’s exciting for me and the place I’ve called home for more than a decade.”

So, what's up at UB? My mantra is "follow the money."
I'm guessing UB is unable to continue paying either one of them.

If you have a bankroll at UB, my advice would be to cash it in ASAP. It looks like the ship may be sinking.

Did you see the recent tweet from the "Poker Brat" last week?

“OMG! Phil Hellmuth (me!) on ‘Dancing with the Stars!’ Outrageous! Might make a fool out of myself on worldwide television one more time.”

I'm not sure I want Hellmuth as my poker ambassador to the outside world. On the other hand, having a poker pro on a hit series like DWTS might bring some new players to the tables. What's the old line, "any publicity is good publicity."

Plus, it might be funny to see a Hellmuth blow up when he doesn't make the cut.

"Are you kidding me? That idiot from South Dakota can't even spell 'dance'. This is so sick! WAA! WAA! WAA!"

I've never watched DWTS, but I think I would watch this potential train wreck!

"So, what ya doing Friday night?"

"Would ya like to go out. Maybe to a movie, get sommin ta eat?"

And so it began.

I was a junior in college, she a freshman. I was working at a gameroom in the mall to help pay for my schooling and she had just started working at a kiosk that was located in front of the gameroom. She sold earrings and pierced ears to insert said earrings. Ouch!

A beauty with long auburn hair, I was instantly smitten. I had never dated a redhead before, so this could be interesting I thought!

Our first date included dinner at a restaurant/bar called the "Handlebar." I don't recall what either of us had to eat, but it's a good bet that a burger and fries were served at some point.

After we ate, we went to see "The Muppet Movie."  Romantic, huh? But, as they say in the movies, "it was the beginning of a beautiful relationship!"

We dated for a little over a year and married on December 27, 1980. That makes today anniversary number 30.

And just as she was on that December day 30 years ago, she is still one hot redhead!

Wishing you and yours a very Merry Christmas and a Happy and Healthy New Year!

I've been invited to participate in a domino tournament this Saturday. The game of choice is "42".

I friend called last week and said that they needed a player. Was I interested? I explained that I have never played, but was willing to learn.

Yeah, I guess they were that desperate!

Another friend who has played 42 for several years came by to show me the mechanics of playing the game. I feel like a player that's new to Texas Hold'Em, I know the rules, but NOTHING about the strategy.

What's a good starting hand? I know in HE, but 42, not so much. How high to bid? Is there trapping?

No doubt I'll be the little fishy in a tank full of sharks.

Anyhoo, does anyone have some advice on how to not look like an idiot playing this game? I've heard it's similar to bridge, but I don't know anything about bridge either. However, I do know an expert bridge player that might be able to help!

Where are you MOJO?

Happy trails.
Posted by Lucki Duck at 9:07 AM 2 comments:

"Be right with you sir," the man behind the counter said as I entered. He was helping a young couple, who were renting a truck for a move to Ft. Hood, finish up their paperwork. After checking their truck for damage, they signed the contract in a couple places, initaled in a few more and then it was my turn.

"I have to move some casino equipment for a party we're putting on for a client and I need to rent a truck."

"OK, I need your drivers license and a credit card."

And faster than a cat can lick his butt, I had produced both items.

Fortunately, Sonny Boy had driven me and I had him drive the rent-a-truck while I drove (illegally) in my pick-up back to my office to load some blackjack, poker, roulette, and craps tables.

Monday morning Ms. Lucki Duck drove me to the DMV. All the chairs were occupied and people were standing in the hallway, waiting to be helped.

"How long am I looking at here?" I asked the lady as she handed me my number.

"At least an hour" she said.

"That means at least an hour an a half ," I thought to myself.

Ms. Lucki Duck and I spent the next 45 minutes doing some Christmas shopping, then headed back to the DMV. "Fifty-five" flashed on the board at the front of the waiting room as we walked in. I looked down at the ticket in my hand.

Another 75 minutes pasted before my number was called. I felt like I had hit the lottery!

A quick eye test, one butt-ugly picture, and $25 later I was outta there and street legal again!

Watch out Texas, I'm behind the wheel again!

The Future Of Online Poker

I read an interesting post on crAAKKer's blog concerning a bill that Senator Harry Reid is trying to push through the current lame-duck session of congress. Here's some of his comments.

A few of the significant provisions of the current version of the proposed bill essentially will require current online poker sites (e.g., PokerStars and Full Tilt) to cease operations within 30 days of enactment of the law, and refund all deposits to customers. Then, there will be a 15 month blackout of all online poker in the U.S. while regulations are promulgated. Next, current U.S. land-based casinos will be able to request licensing from state gaming boards, most likely limited to only either Nevada or New Jersey. Finally, two years later, current non-U.S. and non-casino companies can request licensing.

The upshot of this bill is that current mega-sites like PokerStars and Full Tilt will need to go dark for a little over three years—a lifetime in the online poker industry. Further, eventual licensing would likely be considered by the Nevada or New Jersey gaming commissions, which at least appear beholden to the land-based industry heavyweights such as Harrahs/Caesars, MGM, Las Vegas Sands, and Wynn. So, licensing at a later time is no guarantee; all the gaming commissions would need to do is enact a regulation barring licensing to online gaming sites which violated any state or federal gaming laws in the past decade—not that they would ever act in a protectionistic manner.

So what will the future of online poker look like should this bill pass?

With a blackout period, there's also no guarantee that when online poker returns, it will be the same sort of game as it is currently, or as it was in its post-Moneymaker, pre-UIGEA, Party Poker heydays. Will many current casual players move on to new hobbies, never to return? Or will the easier—and legal—deposit structures, combined with regulatory controls over cheating and "name-brand" sites (e.g., WSOP, Venetian, etc.) bring in tons of new fish? Has the poker boom passed for good, and will the new sites wind up battling for the scraps of hardcore players?

Interesting insights. Go to crAAKKer's blog for the full article. He's a damn good writer and as a bonus, he's a Huskers fan!

Happy trails.
Posted by Lucki Duck at 9:17 AM No comments: