Ms. Duck and I caught an early flight Saturday from Dallas to Vegas and arrived at McCarron in time for a late lunch. After shuttling to the rental car facility, we grabbed our Celica (which we affectionately named the "Plastic Car," because it was hard to locate any metal on it) and drove to the Ellis Island Casino to share a four cheese, grilled cheese sandwich, plus a couple cold glasses of their in-house root beer. 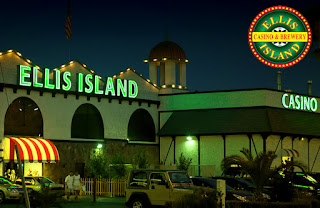 We then made our way to the Walmart on Spring Mountain to pick up supplies for the week before motoring over to the Orleans and checking in. Since it had been a long day already, we decided to stay at the Orleans and play there for the rest of the evening.

The clock on the night stand read 8:58 when our heads hit the pillow and I commented to Ms. Duck what a pair of party animals we had become in our golden years. But, we had been up since 3:30 am Vegas time and we were both spent.

I won our local poker league and the prize was a trip to Vegas and an entry into a WSOP event. I chose the Super Seniors Event again this year and would be joined by Philly Phanatic, who won the second seat our league awarded. 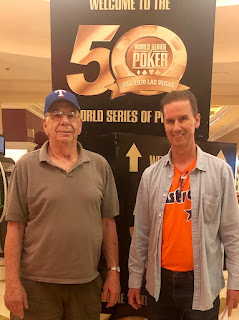 Philly and I met at the Rio Sunday evening and walked the hall to register for our tournament. Once we completed that task, Ms. Duck and I drove Philly and his girlfriend back to the Orleans and bought dinner. The chicken and sausage gumbo was as good as I remembered.

Our tournament started at 10 am on Monday with Philly and I seated only one table apart, which I thought was unusual considering how many tables were used for the 2,600 players who entered.

Beginning with a $20k stack and $100/100 blinds, we had plenty of time to wait for profitable opportunities. We had one player who was uber-aggressive, and my hope was to get involved in a hand with him. My hope was realized when I called a raise with JT soooted and flopped an open ended straight draw. I called Mr. Aggressive's c-bet and was rewarded when my straight hit on the turn. I checked, he bet big, and I pushed my stack towards the center of the table. I was a little surprised when he quickly called and couldn't believe I was all in at only the second level of the tournament. The villain tabled a flush draw, but misses it and I am north of $40k at the first break.

My son texted that he thought doubling my stack every break was a good plan. :) I can't disagree, but the execution is where I was lacking.

I have no big hands to report at the third and fourth levels and at the second break my stack had grown a little to $44k. My table had broken, so Philly and I were separated and I was unable to keep up with how he was doing.

At my second table there was a legally blind player to my immediate left. He used a card magnifier to read hie hole cards and have the dealer read the board to him. It was fascinating to watch him play, and he played well.

When we hit the dinner break I was down to $34k, having lost several small to medium pots. The blinds and antes were getting large enough to be a concern and I knew I needed to start building my stack quickly.

Shortly after the dinner break I was moved again, this time to another room. Looking to my right, I saw Philly sitting at the next table, holding onto a decent stack of chips.

Memphis MOJO texted me earlier in the tournament and I was able to stop and say hi to him as I was moving tables. We were able to visit for a few minutes at a later break and shared an enjoyable talk about poker and preparing for tournaments. MOJO works hard at his craft and it shows in his results. Plus he's a pleasure to be around. 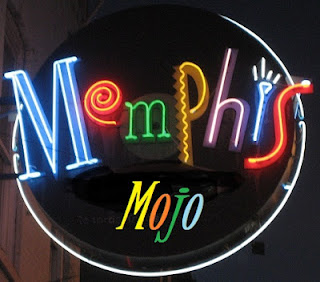 By the time we visited, my stack had dwindled to $18k. I was at $45k when I called an all-in for $25k from the lady to my right. She tabled A9 and I felt good about my AK bringing me a much needed big pot. However, an A-4-9 flop did me in and rather than having $70k to play with, I was short stacked.

A few hands later I pushed with AQ and was called by the big stack at the table who tabled 99. No pair for Lucki Duck and my tournament ended on the final level of the evening.

Philly Phanatic finished the day with $44k chips, but busted at the second level on Day 2, just short of cashing.

Ms. Duck and I decided to drive to the Silverton on I15 the next day, and enjoy the buffet and some gambling. We also stopped by the 117.000 gallon aquarium, which is impressive if you like that sort of thing (I do). 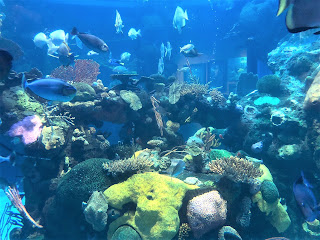 On the way we passed by the construction site of the new NFL stadium. They say it will house a professional football team, but it's the Raiders, so I'm not sure that qualifies. :)

Wednesday was moving day as we packed and moved our operations to the Palazzo, one of our favorites on the strip. Once settled, we decided to have a late lunch at the historic Peppermill. We shared some sliders, quesadillas, and chips with salsa. The sliders were excellent, but the quesadillas and salsa were pedestrian. I guess we are too used to the spicy "Tex-Mex" food at home. The atmosphere was great and we will definitely be back, but for an evening meal next time. 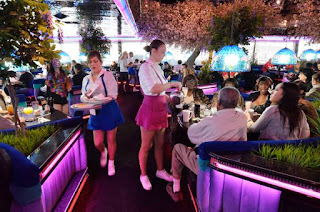 I wanted to get the "bad beat" taste out of my mouth, so I entered one of the daily tournaments at the Flamingo. We were nearing the money when I called an all in with AK, and (again) was happy to see my opponent turn over A7. A seven on the flop ended my tournament as I thought "NOT AGAIN!"

Unfortunately, this was the story of my trip. Whether tournament or cash game poker, craps, video poker, slots; I lost at 'em all. It was one of those trips we all have.

Ms. Duck was the recipient of a fresh summer cold, so there's that.

We caught a late flight from Vegas back to Dallas, which was delayed. Once we secured our truck we headed south to Waco, but didn't get far before coming upon a wreck on the freeway, causing another delay. It was a little after midnight when we pulled in the driveway and completed another fun trip to Sin City.

I can't wait to get back!

Good luck to all who are competing in the WSOP this summer, I hope you make a deep run!

Ms. Duck and I fly to Las Vegas on the 15th, where I will participate in the "Super Seniors" event at the WSOP on the 17th. I had a nice run of cards last summer in this event (click here to read about it) and hope to do well again. 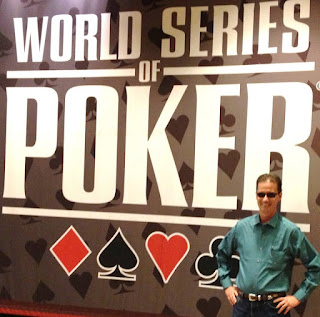 Philly Phanatic won the second seat in our poker league and has decided to play the same event. This will be his first time to play in the WSOP, so it will be fun to see the tournament through his eyes.

We are staying at the Orleans for three nights before moving camp over to the Palazzo for the remainder of the week. We've stayed at both numerous times and look forward to getting back.

We started the eighth year of our Vegas or Bust Poker League last month. I finished fourth, so I have some work to do to win another WSOP seat next year. 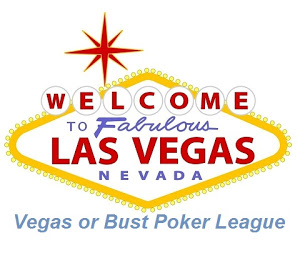 If you're in Vegas the week of June 15th, hit me up and maybe we can share a meal or pitch a few cards.