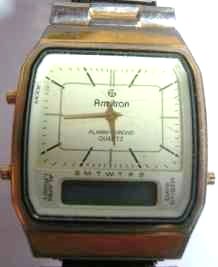 Although it's not much to look at, it's a very special watch to me.

I purchased it in 1979 as a gift to my father for helping me get my college degree. Although I had to put in 30-35 hours a week while going to school to pay as much as I could, without his financial help I would have had a sizeable student loan hanging over my head when I graduated.

It's just one of a thousand different things he did for me.

I could tell he was touched when he received the watch and often mentioned how proud he was to have it. The fact that I had given it to him seemed to be its best feature.

You can buy an Armitron watch similar to this one for $20-30 at any Walmart, but in the '70s digital watches were new, which meant they were expensive. I paid around $200 for this bad boy, in 1970's dollars. If you factor in the devaluation of the dollar since then, it would be... ummm... a lot! Let's just say I worked quite a few hours to pay for it, but it turned out to be a very special gift for both of us.

The watch was in a box of items I received after his death. I have a collection of watches and my mother thought I might like to have it. Last winter I retrieved it from the box, replaced the battery, and was both excited and surprised to see to LCD face come to life and the second hand start its rhythmic movement.

In remembrance of my father I wore it to church this morning. I enjoyed the memories it gave me, so it could well become a tradition. It's not the most expensive watch I own, but certainly the most valuable.