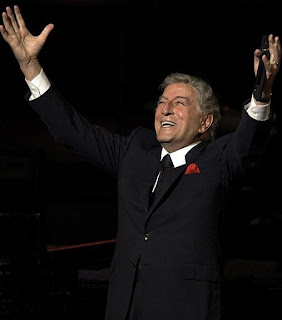 My week got off to a rough start yesterday morning. I hopped in my truck, (it's a law that each family in Texas must own at least one pick-up) turned on the CD player and had Tony Bennett crooning thru my speakers. Tony had been singing for several days, so I decided it was time for Ray Benson and Asleep at the Wheel to take the stage, (pretty eclectic tastes, no?) and I hit the "eject" button to give ol' Tony the hook.

Not only did the CD not eject, but now it wouldn't even play, so I was forced to listen to "Mike and Mike" on ESPN radio, or drive in silence.

It sure was a quite trip :)

I did get the CD to play again, but still can't get the player to spit it out.

Now, I like me some Tony Bennett... a lot. Hell, I LOVE Tony. But I don't want to be married to Tony!

Not only did he leave his heart in San Francisco, he left his CD in my player :[
Posted by Lucki Duck at 12:44 PM