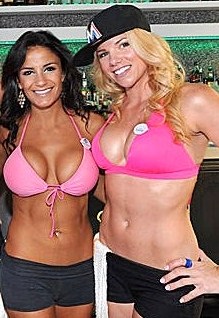 Although we have an abbreviated schedule from which to choose, there are several games on the docket that are worth a look.


Westbrook is 2-1, with a 2.57 ERA in his last three trips to the bump, including a complete game shutout against the Tigers in his last outing. Nolasco is 0-3, 8.80 in his last three. The Fish have dropped 8 of their last 10 games.


Peavy has thrown well in enemy territory this season, posting a 3-1 record, with a 1.67 ERA. He's also been tough lately, sporting a 1.64 ERA in his last three outings. Liriano is having a nightmare season, struggling to a 1-7 record and a 5.74 ERA this season. The White Sox play well on the road as evidenced by thier 19-13 record. The Twins are 13-22 at home this year.


Strausburg has been stellar all season, posting a 9-1 record, with a 2.46 ERA and is even better on the highway (5-0, 2.30). Francis has only started three games with the Rockies, and things haven't gone well as his 0-3 record and 8.56 ERA illustrates. Colorado has dropped 7 of their last 10 games.


Although he doesn't have a win to his credit yet, Eovaldi has thrown well this season, sporting a 2.35 ERA. Zito is 0-3, with a 10.67 ERA in his last three starts, including surrendering 8 runs in 3+ innings against the Angels his last time out. The Dodgers have dropped 7 of their last 10, so I'll go light on this one.