Take Me Out To The Ballgame

Sonny Boy and I joined a group of Texas Ranger fans for a trip to the ballpark to watch the Rangers play the Colorado Rockies, one of baseball's worst teams. A favorable pitching match up had the entire bus breaming with confidence in a Ranger victory.

After 5 1/2 innings, we realized the confidence may have been unwarranted. The Rockies were knocking the cover off the ball and had built an insurmountable 11-1 lead. The home team came back with a six spot to cut the lead to four runs, but that's as close as they could get.

Even though we witnessed a loss, we still had a great time at the ballpark, father and son. Tough to beat an afternoon like that : )

We have tickets to next Saturday's game against the A's, so Sonny Boy, my daughter (Chic Genius), Ms. Duck, and I will hope for a win this time.

Not to be out done by MOJO, here are a few pictures of the day's festivities. Click on the picture for full screen goodness.

We parked next to a train yard, so after the game we took advantage of a vacant Union Pacific locomotive. The hard part was trying to climb on the engine before the camera's 10 second timer went off : ) 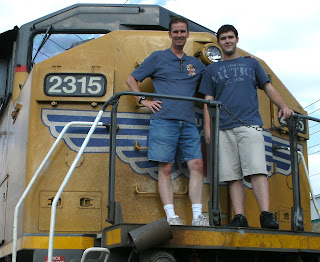 Finally, here's a shot of a van we passed on the way to the game. An example of Texan ingenuity at its finest! 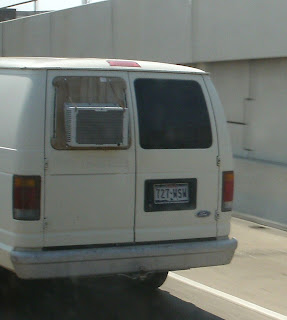