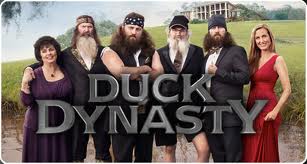 Have you seen the new TV show on the A&E network? Duck Dynasty has gone to the top five on my "must watch" list. My favorite scene is the two boys practicing tee shots, with their dad and uncle standing off to the side shooting the driven golf balls like you would skeet. Hilarious!

However, this post isn't really about the show, but about my recent run in our Vegas Or Bust Poker League. I've been runnin' goot!

This was the fourth of 16 league tournaments. At the end of league play, seats to the 2013 WSOP will be awarded to the first and second place finishers.

Blinds start low and increase slowly to allow for plenty of play. Because of that, all ten players were still alive almost two hours in. Stamps was the first casualty of the evening when he ran his pocket queens into my aces and didn't improve. Big Daddy was next out, when Dealer Larry's set beat his two pair. J-Dawg was the next to fall when his pocket jacks got run down by A-K.

Philly busted in seventh, followed by Bobby Dee, who had built a nice stack early, but couldn't hold onto it. Dealer Larry exited in fifth, followed by Tin Man in fourth.

I felted Ollie when my A-K held over his A-T.

But, as I mentioned earlier, I have been running good in these tourneys. This hand was no exception, as I rivered a gut shot straight for the win!

After finishing third in the first tournament, I've now won three in a row.

Till next time, win the flips.
Posted by Lucki Duck at 9:12 AM