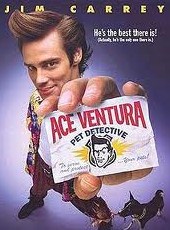 We had six runners show up for Tin Man's $5 NLHE Tourney last Friday to pitch a few cards.

I was surprised we were able to get together and play since Tin Man had leg bypass surgery on Wednesday. When I went by the hospital to see him on Tuesday, he said that he was planning on hosting the Friday game.

Friday morning his wife, Lil Okie Annie called to say that poker night was on. In the words of the world's greatest pet detective, "Well ... alrighty then!"

Philly was the first to go when his top two pair lost to Big Daddy's set. He couldn't hold onto his stack however, and was second out when Tin Man's top pair held against Big Daddy's second pair with a busted straight draw.

Annie felted Tin Man, sore leg non-withstanding and suddenly we were down to three.

Ranger Rick pushed with his last two BB. I insta called when the first card I peeked at was a king.

"Ouch'" Rick said when I flipped my cards and fanned them, exposing my kicker. Another king!

"Don't let me get "Rob'd'," I thought as the flop was exposed. Fortunately, my kings held and it was down to heads-up with Annie, who was severely short stacked.

We only played three hands before she pushed with the best hand, but I paired my queen on the river for the W!

As is usually the case, I donked around in the $2 cash game and ended up losing four dollars. However, combined with my tournament win, I still cashed out $16 to the good.

I'll be hosting the Pokerpalooza party at the Duck Blind on Tuesday, so be looking for a write-up on it next week.

Till next time, win the flips.
Posted by Lucki Duck at 9:28 PM