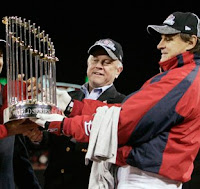 A little premature you say? Maybe, but I don't think so.

Last night's Game 6 was certainly entertaining and exciting. It wasn't great baseball (one blog I read commented that it looked like something you would see in a Dominican Summer League game), with dropped pop ups, booted ground balls, bad throws, base running errors, etc. But, in the end, the Rangers were within one strike of winning the title and couldn't close the deal.

It was a devastating loss. Can you imagine the feeling in the Texas clubhouse as they walked in to see the plastic sheeting being torn down and the Ginger Ale put away?

It reminds me of the Red Sox loss to the Mets in the '86 World Series (Buckner). That was also a Game 6, but you knew there was no way Boston was going to win Game 7. And they didn't. The emotional baggage Texas carries in to tonight's match, plus the favorable pitching match-up, gives the Birds a decided advantage.

LaRussa will start his ace, Chris Carpenter on short rest. Carpenter hasn't been overpowering in his two starts, but he has thrown the pill well and held the Rangers at bay. Washington shot all his bullets last night and is stuck with Matt Harrison for the most important game of the season. Harrison couldn't get me out right now. Remember the 16-7 lambasting the Cards laid on the Rangers in Game 3? Guess who started that game?

Does all this mean it's impossible for the Rangers to win tonight? Not at all.

The '75 Reds came back to win Game 7 over Boston after Carlton Fisk's walk off homer in Game 6, so it could happen.