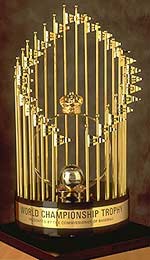 The World Series begins Wednesday night in St. Louis when the Cards host the Texas Rangers for two games before the series shifts to Texas on Saturday. The Dallas sports scene has been on quite a run in the last year, hosting the Super Bowl, NBA Championship, and the World Series. Twice.

Game 1 starters are Wilson for the Rangers and Carpenter for the Redbirds. Wilson had a solid season, but has struggled in the playoffs, going 0-2 with a 8.04 ERA. Carpenter has been solid in the post-season, posting a 2-0 record and a 3.71 ERA. Wilson is one of several southpaws in the Texas rotation and St. Louis has not fared well against leftys, going 20-22 on the season.

The Redbirds are a slight favorite in the opener, but I think I'll pass on this one and see how both teams play in the cold conditions.

I think the Rangers will be happy to steal one game in St. Louis and if they do so, I think they'll win the series. However, if the Cardinals take the first two, it will be tough for Texas to recover from such a big hole. I think the Rangers best chance to win is in Game 2, but a Game 1 victory is certainly not out of the question with their explosive offense. And if they somehow steal them both, the series will end with a celebration in Arlington and won't return to Missouri.

It should be an exciting and high scoring World Series, with no Yankees, Phillies, or Red Sox in site.