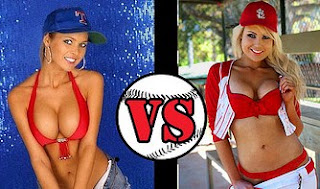 It's expected to be a rainy night in Georgia St. Louis tonight when the Rangers and Cardinals meet for Game 6 of the World Series. A rainout would benefit the Cardinals, as they could pitch Chris Carpenter in Game 7 on short rest, instead of Lohse, who has struggled lately.

Both pitchers have thrown well in the postseason, with Colby Lewis sporting a 1-1 record, with a 2.95 ERA, and Jaime Garcia at 0-2, witha 3.97 ERA. Garcia has been particularly tough at home, posting a 1.93 playoff ERA.

Lewis allowed only 1 run in 6+ innings against the Birds in Game 2, but was bested by Garcia, who threw 7 innings of shutout ball before the Rangers rallied for two runs in the ninth to steal a win.

Add it all up and what you have is a close, low scoring game. Thus far, the Rangers have found a way to win the close ones. The Cardinals, not so much. If the trend (and the weather) holds, Texas should be hoisting the championship trophy tonight.