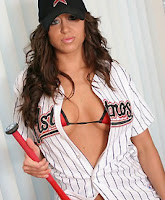 I'm pretty excited. I actually get to pick my Astros to win a game. Thank you Pittsburgh!


Rodriguez is coming off an impressive outing, throwing seven shut out innings and has a nice 2.05 ERA in his last three starts. The Astros closer Lyon is injured, but has blown 4 saves already this season and has a 7.15 ERA. Melacon is the new closer for now, which is a good thing. In almost 16 innings this year, his ERA is a tidy 1.72. Hopefully, the Houston bullpen will actually hold on to a late lead. the Pirates Maholm is 1-2 in his last three trips to the hill, with a 6+ ERA. Go Astros!


The White Sox are 4-17 in their last 21 games, scoring 2 runs or less in 12 of their last 19. Hernandez has thrown shutouts at the Sox in two of his four starts at Safeco.