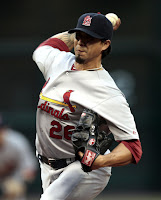 I see three games I like on today's schedule. It would be four, but the Angel's starter (Weaver) is coming off a stomach virus and may not be in top form against the Red Sox, so I'm going to pass on it.


Colon is throwing well, with a 1.53 ERA thus far. The Tigers have dropped 6 in a row and their bats are deader than Osama, averaging less than three a game during the losing streak.


Jurrjens sports a 1.23 ERA this season. Gallardo's is over 9 in his last three trips to the bump.


Lohse is 4-0 with an ERA south of 1 in his last four starts. Doesn't get much better than that! The Brewer's Volstad's is above 6 in his last three games.