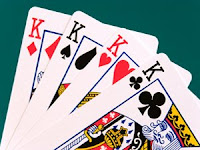 Seven of us met at J-Dawg's last Thursday for his Poker Extravaganza. A few chicken strips and fries with cream gravy, plus chocolate cookies for dessert and we were ready to pitch some cards.

I had a good seat at the table, one with the best view of the Heat/Bulls playoff game on the tube. We were all rooting for the Bulls to extend the series and give our Mavericks an extra day or two to rest their old bones and get ready for the NBA Finals.

Woody's son Joe came again and was seated to my left, followed by J-Dawg, Ray-Ray, Riverboat J, Ollie the Accountant, and Farmer Harry.

Things started well for me, winning a big pot on the first hand with aces full of queens. Plus the Bulls had taken a seven point lead over King James and his court.

The most interesting hand of the night for me in this $20 buy-in, dealer's choice limit game, was one I would just as soon forget. We were involved in a hand of Omaha high when I looked down at K-K-9-4, with one of the kings being suited. I raised and four of us saw a flop of A-6-6 rainbow. J-Dawg bet out, so I folded my second pair since I had no flush of straight draws and I figured i was drawing pretty thin.

I know I'm not supposed to be "results oriented" when looking at my poker hands decisions, but damn. It was hard to see Joe rake in the High Hand Jackpot for the evening with quad jacks, knowing it could have been mine.

I went card dead and watched my chip stack shrink while watching the Bull's lead over the Heat shrink. But, unlike the Bulls, I did walk away with a $5 profit for the evening. The Bulls just walked away.

They won early, I won early. They lost the last four games of the series, I lost most of what I won on the first pot. I guess you could say we both started fast, but finished slow.

Joe was the big winner for the night, pocketing a $25 profit. Riverboat J took the biggest hit, losing all but $1.50 of his starting stack, which is unusual since he is one of the top players at the table. But he kept getting rivered time after time. Some nights are like that.

Till next time, win the flips.
Posted by Lucki Duck at 5:21 PM