Yesterday was a fun one in the gaming capitol of the world. I received a text from lightning36 and we agreed to meet at Ballys poker room.

Ms. Lucki Duck and I arrived around 11 local time. She went to play some video poker and I found lightning at a $1-2 no limit table. He was able to get a table change and we were able to sit next to each other and visit between hands. We played for an hour or so, found Ms.Lucki Duck, and headed to one of the casino restaurants for some grub. While we were playing, Neophyte showed up at the poker room. There weren't any open seats at our table (probably because everyone wanted to play with a celebrity,,, lightning), so he was seated at another $1-2 game. He did join us for lunch, with his wife, Video Poker Queen (VPQ) also coming.

It was a great visit, with all of us mostly talking about our kids and the joys and challenges associated with raising a family. Since all of us have children that are similar ages, it was interesting to hear what other parents are facing and I definitely recognized the pride lightning and neo had for their kiddos. It will probably go down as the highlight of the trip, unless I hit a progressive today!

I had another rough day in the casinos. I dropped a few sheckles at Ballys, then a little more when Ms. Lucki Duck and I walked over to the Paris casino. I did get to see a woman sitting at the video poker machine next to me hit for 5,000 with a straight flush. Even more amazing is that it was a pat hand, with the woman not drawing any cards.

From there we headed over to Treasure Island where I played a tourney there while Ms. Lucki Duck headed next door to the mall to do some damage. My streak of poor starting hands continued and I only played three hands in the tournament. I don't know how many 9-4, 8-3, 7-4, 6-4, etc hands I have gotten out here this week, but it's been an amazing run. I was the BB and checked my K-Q of hearts. The flop was all diamonds, with no K or Q. I checked, one player bet, one raise, two calls and I folded the only hand I was involved in for the first hour of the tournament.

My busto hand was the infamous A-Q. The big stack had been bullying the table and min raised from UTG. There was one caller, who had been playing loose/passive, so I pushed for my final 8BB. The only hands that scared me were

So, which do you think it was? If you said "D", you are a winner! Oh well, I feel like I played the hand the only way I could, it just didn't work out like I hoped. 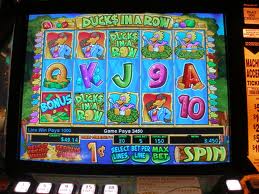 On my way out of the casino, I saw a penny slot called "Ducks In A Row." I figured it was a sign, there was no way a duck machine would let Lucki Duck down! I sat down and played for about 30 minutes and each time I hit something the machine would tell me what a Lucky Duck I was. However, the bottom line is that I left $17 lighter. Not so lucky.