Sonny Boy and I spent the day in Ft. Worth at two art museums. That's right, Lucki Duck is one of those "artsy-fartsy" types! In order to complete an assignment for his art appreciation course, my #1 son had to attend a museum that housed paintings created by some of the masters in the art world. He invited me because he knows I'm a dork that likes to walk thru art exhibitions.

We left for the Kimbell Art Museum around 8:30 this morning, stopping for breakfast on the way, and arrived a little after eleven. Neither of us had been to the Kimbell and we were both pleasantly surprised. On display were works by well known artists such as Van Gogh, Rembrandt, Titian, Piccasso, Cezanne, Matisse, Michelangelo, Caravaggio, and quite a few more.

We weren't there more than five minutes when one of the security guards got on Sonny Boy for pointing at one of the paintings. "Please don't get too close. Please keep your hands at least 12 inches from the painting'" she said.

"Way to go'" I whispered, "Haven't hardly walked thru the door and you've already gotten us yelled at"!

As we were finishing our tour of the exhibition, I offered Sonny Boy five bucks to go up to the security guard and say, "I'll take that big one over there and the two in the corner. Could you wrap them up for me?" LOL!

When I was working on my BFA in Graphic Design many moons ago, part of my assignment on field trips like today, was to pick my favorite painting and explain what is going on in the scene. I thought it might be fun to do it again now.

My favorite piece was Caravaggio's "The Cardsharps." 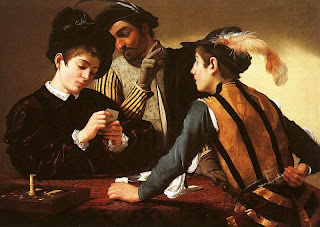 In this work, completed in 1594, Caravaggio is illustrating a common scene for the time period and also for today. The woman on the left represents the common man or woman card player. The gentleman in the middle is Full Tilt Poker's central computer. As you can plainly see, he is signaling the woman's hand to the man on the far right, who represents Full Tilt's "random" number generator. Caravaggio hits the nail on the head (although 400 years early) by showing that the RNG is palming a card and also has several more behind him that he has ready to pull out of his butt if necessary to hit the one outer on the river and break the woman's (representing you and me) heart.

"Random" my foot! There's a reason they named the site "Full Tilt!" Duh.

I can't decide if I'm more impressed with Caravaggio's use of color, contrast, and composition in his work, or his uncanny ability to see into the future. Well played sir, well played indeed.

We had some time after we finished at the Kimbell, so we drove up the block to the Amon Carter Museum. The Carter features mostly American western art, with a focus on Remington and Russell. We both enjoyed walking thru this museum also. I'm sure we'll be going back to both in the future.

A nice day spent with my son. And we both learned a little bit. Good times!

Till next time, win the flips.
Posted by Lucki Duck at 7:04 PM