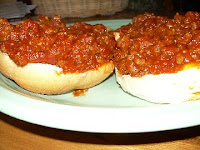 I had a good nite on the felt at J-Dawg's Poker Extravaganza. Farmer Harry brought some Sloppy Joes he had made. Throw in some chips and a chocolate and coconut cake and you have the makings of a pretty tasty meal.

We had ten runners throw in $20 each in this dealer's choice limit game. I won a couple of small pots early and managed to stay in the black the rest of the night.

The final hand of the night produced the biggest pot. J-Dawg picked Omaha High and dealt me pocket aces with a couple of trash cards. The flop brought another ace and the river ten filled my boat. Cell kept betting into me and I kept raising him. Dealer Larry came along with his straight, which cost him a lot of money in the end. Cell tabled nines full, which lost to my aces full and brought me a $15 pot. Nice!

Bobby Dee won the High Hand Jackpot with quad twos and I was the big winner on the evening, cashing out for a little over $45, which more than makes up for my loss last week.

I'll be heading over to Tin Mans tomorrow night to play in his tourney and then the cash game. Hopefully, I can keep my streak going.