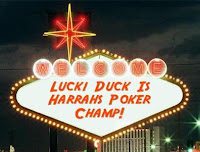 I headed over to Treasure Island after lunch today to play some $1-3 NL, but there was a waiting list. Rather than waiting, I took the tram over to the Mirage, but ran into the same thing. I was off again, this time across the street to Harrahs. There was a waiting list there also, but the hostess said the $60 tourney had just started if I wanted to play. I agreed and was seated immediately.

I was the BB in my first hand and looked down at A-K. Wow, an actual hand.

Maybe today is my day!

I wiffed the flop and although I had raised 3.5X, I had four callers behind me. I checked, the player to my left bet 2/3 pot and was raised. I did the prudent thing and folded.

Maybe today is not my day.

I did get my share of playable hands and was able to build a healthy stack heading into the final table. Players started dropping pretty quickly as the antes and blinds climbed and before you knew it we were down to five players. That's when I got on my first rush of the trip! I won four hands in a row with starting hands of A-J, A-K, A-K sooooted, and A-T. I knocked out two players and was about even in chips with an older woman. The third player was down to 5BB and looking for a place to push. Both remaining players were playing too tight three-handed. The SS was able to double thru the lady a couple of times, which gave me the chip lead. Both of my adversaries now had equal stacks, so it was the perfect time to get aggressive and start stealing pots.

I was the BB with K-4 when the older lady completed her SB after the button folded. She pushed her remaining stack on a K-9-8 board. I insta-called with my top pair and she tabled Q-9 for second pair. The turn and river didn't help her and I was heads-up with a huge chip lead.

A few hands ;ater my opponent pushed for 3BB with K-9 sooooted and I called with A-J. An ace on the turn wrapped it up for me.

I'll still go home with a small loss for the week, but the payout from winning the tourney kept it from being a rough week money wise. Also, knocking out the final four players was kind of cool too.

And it's nice to head home on a winning note!