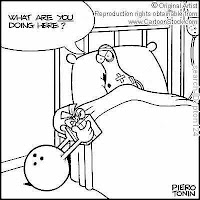 Poker has been kinda meh for me the last few days.

I committed the cardinal sin of blinding myself out in the tournament. I was pretty much card dead the whole time. We were down to six of the starting 11 players, when I looked down at K-8 from middle position. My $100 starting stack had dwindled to $55. With blinds at $25-50, I decided to open shove before I had to take the blinds again. One BB doesn't give one much fold equity (LOL), and I was called by Tin Man, who I had covered, Chasity, who was the chip leader, and Josh, who also had $55.

I can't remember who had what, but Chasity won the hand with a rivered flush, taking all three of us out. As a matter of fact, of the 11 players, Chasity felted nine of us and ended up splitting the first prize money with Lil' Annie Okie.

Internet poker has cooled for me. I'm back to losing to three outers on a consistent basis. I've dropped about $70 in the last week, but hopefully things will turn around soon.

I'm still five tabling the $6- 18 man tourneys on Full Tilt, occasionally slipping in an $11 buy-in. I've also six tabled a couple times, but dropped back to five until I hit my next hot streak.

In non-poker news, we finished our bowling league last night. It's been quite a while since I've broken 200 at the alleys, but finished strong, rolling a 208 and 217.

I hope all of you are off to a good start this week.

Until next time... happy trails.
Posted by Lucki Duck at 8:43 AM