I saw this story on The Onion website the other day and thought it was hilarious!

As you may have guessed, my sense of humor is a little twisted :o) 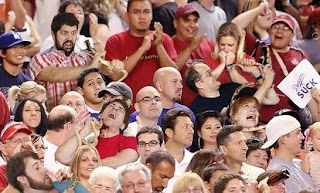 PHOENIX—The Arizona Diamondbacks organization apologized to fans, their families, and the community at large Thursday after more than 16,000 people attending the previous night's game were killed by the poisonous Western diamondback rattlesnakes given out as part of Complimentary Rattlesnake Night.

"I feel terrible," Diamondbacks general manager Jerry Dipoto told reporters as emergency personnel working out of temporary triage stations around Chase Field injected antivenom into the estimated 23,000 victims who survived the initial wave of snakebites. "All we wanted to do was give people something that was symbolic of the Diamondbacks, something they could take home and keep to remember the team by."

"I don't think they'll be taking their rattlesnakes home after this, though," Dipoto said. "They probably won't want them now that all those people are dead."

The rattlesnakes, which average 4 feet in length, weigh about 10 pounds, and account for the second-highest number of snakebite fatalities in the United States, were given out to the first 20,000 ticket holders who entered the stadium. While some volunteers initially suffered bites that destroyed their muscle tissue and caused major paralysis, event organizers said the promotion seemed to go smoothly at first.

"Other than a few hundred fans who complained of swelling, dry mouth, and blurred vision, most seemed to really like their rattlesnakes," said promotions manager Dustin Payne, who doctors believe will make a full recovery after the loss of his left arm due to venom-induced cytotoxic tissue necrosis. "They were twirling them around by their tails, you know, sort of like a Terrible Towel thing, and we were all thinking we had maybe started a great stadium tradition."

Observers said that even prior to the initial deaths, a number of isolated incidents seemed to indicate that the night was headed for disaster. One particularly rowdy fan had to be escorted from the game after waving his rattlesnake in a female attendee's face, and later, outfielder Gerardo Parra was poisoned and had to be carried off the field after a fan asked the hard-hitting lefty to autograph his rattlesnake.

When Diamondbacks reliever Blaine Boyer was spotted in the bullpen wildly convulsing in a writhing knot of rattlesnakes, the stadium grew quiet, save for a steady undercurrent of rattling.

Videotape of the event later showed thousands of fans toppling over and clutching their chests as the snakes' neurotoxic venom caused massive respiratory malfunctions and heart failure. Though most of the Western diamondbacks ultimately sought refuge underneath the stadium seats, by the seventh inning half the people in the stands were dead.

"Everywhere you looked, snakes were lashing out and biting people. I saw a man get bit in his calf, reach down to grab his leg, get bit in his face by another snake, fall down, and then get bit several more times on the top of his head," said Graham Rossini, the Diamondbacks' director of Special Projects and Fan Experience. "It's weird because they were such beautiful snakes, too. I think the problem was that we gave out a lot of older rattlesnakes, and apparently they can deliver much more venom."

"We probably should have given out baby rattlesnakes," he added.
The Diamondbacks organization has announced that it will donate all unclaimed rattlesnakes to a local children's charity next week. Until then, ticket holders who did not receive their rattlesnake may do so by sending the team a self-addressed stamped envelope and $8 to cover shipping and handling.

I hate when that happens!

Hat tip to theonion.com.
Posted by Lucki Duck at 11:17 PM