"Have You Ever Played Poker Before?" 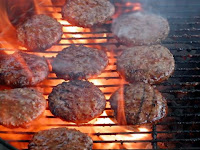 Burgers and brownies were on the menu at J-Dawg's Poker Extravaganza last night. J fired up the ol' grill and turned out a mighty fine sammich! Grilled meat is hard to beat! Larry the Mailman brought some brownies for dessert.

We had 11 runners, with "Riverboat J" making an appearance after missing the last two weeks. Riverboat is probably the most accomplished player in this game (other than me, of course!) and he was seated two to my left. Not the best position.

Bobby D was directly to my left and managed to play the entire night without winning a pot. "A new record" he exclaimed!

I won two of the first three pots in this $20 buy-in mixed limit cash game. The first pot I won was a rivered full house (Q over J) in a game of hold 'em and the second was a nut flush in Omaha high.

I was up about $20 after the two wins and also had a grip on the High Hand Jackpot with my boat. Farmer Harry took that away from me when he flopped quad nines in Omaha high. But, Woody later took down the HHJ with quad jacks, also in Omaha and also hit it on the flop. I guess there's no need to wait till the last minute to make your hand.

My favorite hand of the night was in a round of hold 'em. I was in the cut-off and looked down at 3-2 sooooted. Of course, my only option was to raise with such a strong hand!

I had five callers and we saw a flop of 2-6-J. Checks all the way to me, and I fire out a bet with my awesome bottom pair. Three folds and we were down to three of us in the hand.

Turn is a king. Check, check, and I bet my powerful pair of ducks.

A deuce of course!

Two checks in front of me and I bet my trips. Both villains fold, but I HAVE to show my hand. Right?

I table the 3-2 and the Pissing and Moaning Club meeting is called to order.

"You raised with that crap?"

"What the hell are you thinking?"

"Have you ever played poker before?"

LOL. Priceless, plus I'll get action on my big hands for the next couple of weeks.

I cashed out with $38, not quite a double up, but still a good evening. Riverboat J was the big winner, cashing for a little over $50.

Tin Man's $5 Buy-In Tourney is tonight. I don't know how I'll do, but I do know I won't let myself blind out again like I did last week.

Happy trails.
Posted by Lucki Duck at 9:08 AM