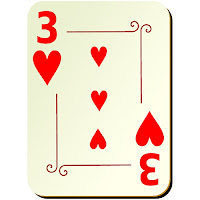 I played some "small potatoes" poker this weekend, in the "Tin Man's" $5 buy-in tourney and ended up chopping it for a nice $15 profit.

The most fun hand I was involved in happened late in the tournament. We were down to three players, with blinds at $50T-$100T, which left all of us with around four BB. It was definitely push or fold territory.

I was in the SB, with "Bluffing" Bev in the BB. I call her "Bluffing" because in the six years I've played with Bev, she has almost NEVER bluffed! The button folded and I looked down at A-3 off. I push, only to get insta-called by "Bluffing." Bev is a tight player, so I knew immediately that I was in trouble. My suspicions were confirmed when she tabled an A-T. I laughed and said "You realize I'm going to suck-out on you. And I'm gonna do it by hitting my three on the river!" As the dealer began to turn the river card over, I pulled my imaginary six-shooter and hollered "BAM!" And can you believe it... a three! LOL!

"Bluffing" then began hollering. She questioned the marital status of my parents upon my birth, my sexual orientation and then requested I do something with the deck of cards that I'm pretty sure is anatomically impossible! Hilarious stuff!

Bev and I chopped the prize money and moved on to the $2 buy-in cash game.

One interesting hand in the cash game involved myself and "Flyboy," who was on leave from the Air Force. "Flyboy" raised to .50 from early position and I called with K-7 suited. The flop was K-5-4 rainbow and "Flyboy" shoves for his last $2.20 with only $1.30 in the pot. I go into the tank, wondering why he would push in this situation. I don't think he would shove with a set, but rather string me along on a pretty dry board. As I was pondering the situation, "Flyboy" asks, "You got A-K?" I've found that over the years, if someone asks a question like this, whatever hand they ask you about is a hand that will beat them. So, I went with my read and called. "Flyboy" flips over pocket sevens and doesn't improve and I rake a nice $5+ pot.