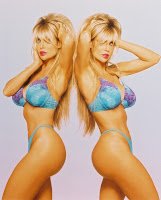 Following G-Man's recommendation, I played a couple more $10 buy-in "Double or Nothing" tournaments on Pokerstars last night and cashed in both.

I knocked out the bubble boy in the first tourney when the villain open- pushed from the SB for around $1,000T (5BB). I was in the BB with $3,200T and called with A-9 off. The villain tables K-6 off. An ace was in the window and that was that.

I got lucky in the second game. Down to 5 BB, I open- shoved from the SB with pocket fours, only to be insta-called by the BB, who had T-T. I flopped a 4, doubled up and cruised into the money.

That's three cashes in four tourneys. So far, so good!
Posted by Lucki Duck at 1:22 PM