Duck Tape- Thoughts That Stick in My Empty Head 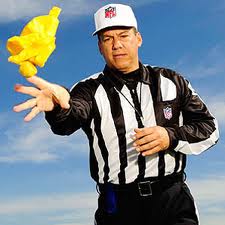 I took my kids, Sonny Boy and M2, along with Sonny Boy's new girlfriend, to see the Baylor/Sam Houston State match up on Saturday evening. We had a good time overall, and saw most of a pretty entertaining football game.

I say "most" because we left after the third quarter and here's why. The game started at six o'clock and I figured it would last about 3 to 3 1/2 hours, because Baylor likes to fling the ball around the field kinda like we all used to do in our backyards. Incomplete passes cause the clock to stop, so I knew it wouldn't be a short game.

Boy, was I right.

Being such a huge match up, obviously having national championship implications, the game was televised by one of the networks (ESPN 8 I believe..."The Ocho!") which meant TV timeouts. In addition, the referees must have wanted a lot of face time on the Ocho, because about every third play they would throw a flag.

And the clock would stop.

On top of the laundry issue, were the reviews. Oh my dear Lord in heaven, I don't know how many booth reviews there were in the first three quarters, but it was more than you can count on your fingers.

And the clock would stop. For a long time.

After a little over three hours, the third quarter ended with Baylor leading 24-23 and Sam Houston with a fourth and goal on Baylor's one yard line. Our group still hadn't eaten dinner, so we left.

Three hours is long enough for any sporting event. There were too many flags, too many reviews, and way too many TV timeouts. I've already pretty much quit watching the NFL because of all the commercial breaks and it looks like college football might get crossed off my list too.

I know commercials pay the bills for both levels of football, but the games are going to have to be shortened or I'll find something better to do with my time.

Back with more after this brief commercial break :)