"The President Is Dead" 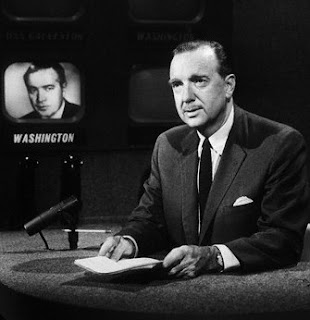 That's Eddie on the left.

Chances are you've never heard of Eddie Barker unless you're from the north Texas area. Eddie was the first to report President Kennedy's death on November 22, 1963, scooping the national boys by five minutes.

"Barker spoke often about the killing of Kennedy; after all, it fell to him to break the grim news. As he told our John Anders in September 1993, “I pretty much get credit for coming on the air first. This doctor from Parkland came up to me at the Trade Mart and whispered, `Eddie, he’s dead."


After Eddie told a nationwide CBS audience of the President's death, the network quickly went back to Walter Cronkite in New York. Cronkite immediately stated, "You know, that ain't us folks. That's a hotshot saying he's dead. It's not CBS saying he's dead."

Click here for more details from the Dallas Morning News on how Eddie got his info first.

Goodbye to a top flight journalist from a bygone era.
Posted by Lucki Duck at 10:50 PM