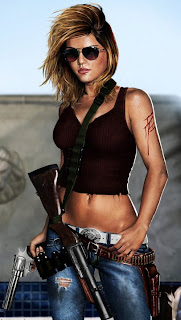 If you look closely, there really is
a six shooter in this picture.﻿

Tonight is the seventh of sixteen league tournaments in our Vegas Or Bust Poker League. The top two finishers both win seats to next summers WSOP, airfare and hotel included.

Thus far I am leading the standings just short of the half way mark. After finishing third in the inaugural tourney, I have run off five straight wins. Tonight I'll be shooting for number six.