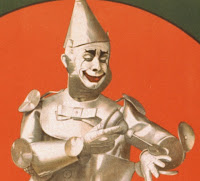 Ollie, Philly, and Bev all busted early, with Jaime felting two of them. He also sent Big Daddy to the showers a short time later. Lil'Annie Okie lost a big hand leaving her very short-stacked and pushing with a baby ace. Jaime called her with K-J and paired the king on the flop, putting us in the money.

Down to three players, I was the shorty, but was able to double thru Jaime and get back in the game. I lost a race with Tin Man a little later, which dropped me down to 2 BB. Not good.

With blinds at $50-100, Jaime folded from the button and I pushed my final 110 chips into the middle. Tin Man woke up with pocket nines and I was a dead duck.

Tin Man and Jaime chopped the first place money and we were off to the $2 cash game.

I didn't have any memorable hands in the cash game, but just played solid poker and finished the evening with a $4 profit and a lot of laughs.

Tin Man had two stents put in his right leg last Wednesday and goes back this Friday to do the other leg. His wife, Lil' Annie Okie goes back to San Antonio today for another follow-up to her hernia surgery she had a couple months ago. The last two follow ups have included removing dead tissue from around the incision. Hopefully that won't be necessary this time.

"We're both a little gimpy right now" she said.

Good luck, prayers, and positive vibes to them both this week.