The Ghosts of Red Sox Past 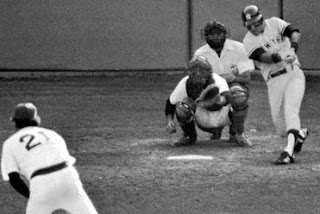 What an amazing final day of the 2011 Major League Baseball season! With the wild card up for grabs in both leagues, three of the four games went down to the wire.

The Cardinals scored five runs in the first inning and cruised to an easy victory over the Astros.

The Braves had a one run lead in the ninth inning, but couldn't hold it and finally lost in extra innings to the Phillies, and completed one of the biggest September collapses in recent memory.

But no one loses as spectacularly as the Red Sox. Tied in the standings with Tampa Bay, the Rays fell behind the Yankees early and found themselves in a 7-0 hole with only six outs left. I mean, the Yankees hadn't blown a seven run lead in the eighth inning since 1953! Meanwhile, Boston was clinging to a 3-2 lead over Baltimore late in the game. If you're a Red Sox fan, you had to feel pretty good about your chances, since your team is 77-0 when leading in the ninth inning this season.

Then the ghosts of the Babe, Bucky F'in Dent and Bill Buckner appeared. The light hitting Rays exploded for six runs in the eighth inning to cut the Yankee lead to 7-6. With two outs in the bottom of the ninth and two strikes on the hitter...

The Rays and Yanks play into extra innings as Boston and Baltimore go to the bottom of the ninth with the Sox leading by one run. The first two hitters for the Orioles are quick outs, and the Red Sox only need one out to win the game. Double, double, single, and Baltimore stuns the Red Sox nation with a 4-3 win and the Boston fans are reduced to hoping for a Tampa loss and a playoff game Thursday. But, it wasn't meant to be as Longoria hits a game winning dinger only three minutes after the Red Sox coughed up their game and season.

What an exciting and heart wrenching night of baseball!

Looks like it's gonna be a long cold winter in Boston.
Posted by Lucki Duck at 11:47 PM