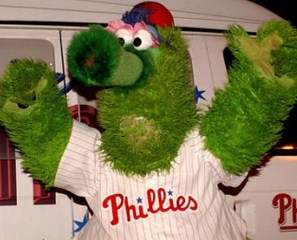 We had eight runners show up to pitch a few cards Friday night at Tin Man's $5 NLHE Tourney. From left to right on your radio dial were Big Daddy, Josh, Bluffin' Bev, Phillie Phanatic, Lil' Annie Okie, Tin Man, and your humble scribe.

I had won or chopped the last four tourneys and was looking to extend my streak to five. I was the SB in the first hand and looked down at Big Slick. With three limpers in front, I raised 5X the BB ($10) and got two customers. The Q high flop missed me, but I threw out a 1/2 pot continuation bet and took down the pot.

Blinds were only at the second level when Lil' Annie Okie felted Tin Man with a 6 high straight, which was enough to beat Tin Man's wheel. Josh was the next to fall when Bluffin' Bev rivered a straight and won the $8 bounty. Bev was the next to go broke, followed by Annie. I felted Big Daddy with my top pair, which held up to beat his second pair and gut shot straight draw.

That left Phillie and myself and we decided to play it out rather than chopping first place. We traded barbs over a dozen hands or so and finally got it all in pre-flop. Philly tabled pocket eights and I had the same hand I started the tournament with, Big Slick. I paired my king on the river, but Phillie had flopped a set and it was too little, too late fo me. But I did turn a profit by cashing the $15 second place prize, so it wasn't all bad news!

Hope everyone is having a great Labor Day weekend. Thanks for stopping by :)

Till next time, win the flips.
Posted by Lucki Duck at 5:28 PM