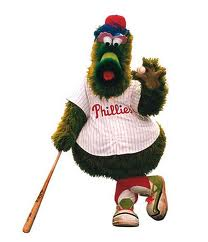 Tin Man and Lil' Okie Annie were in high spirits, as they learned that a friend that they had bought a piece of for the WSOP Main Event had cashed. So I guess you could say that they were the big winners on the night.

Philly Phanatic was a wrecking crew in the tournament, knocking out every other player at the table on his way to victory. It seems like you should get a bonus for that! Tin Man was the first to go when his two pair ran into Philly's straight. Ms. Duck was next, followed by Big Daddy and Lil' Okie Annie. I got all my chips in the middle when I flopped top pair. Philly called with bottom pair, but hit trips on the turn and that was all she rote.

Ms. Duck had doubled up her original $2 buy in at the cash game by the time I sat down at the table. She continues to play tight/passive poker, and ended up blinding down and then losing one pot to go busto. She sat out a few minutes, then rejoined the game and caught fire, cashing out for $10 at the end of the evening. I like to mix it up a little, and my stack had some wide variance. I ended up re-buying three times ($6 total), but cashed out for $16 by he time the last card hit the felt.

I was able to win a big pot against Tin Man when I rivered a straight. Tin Man had two pair and had bet it on the flop and turn. I figured he'd bet the river also and was able to check-raise him for a nice score. I also ran well against Big Daddy, although he took a pot away from me with the worst hand. I rivered a straight, but the river also put four hearts on the board. Add that to the hearts in my hand and there's still just four. I checked the river and Big Daddy shoved. I hem-hawed for a minute or two before folding my straight, face up.

"You're not gonna like this," Big Daddy said as he tabled pocket aces, neither a heart.

It had been a couple weeks since I had played at Tin Man's and it was good to see everyone again. Leaving with a few extra sawbucks didn't hurt either!

Lil' Okie Annie is scheduled for major surgery this Tuesday in San Antonio. She has had hernia issues for a while, with three previous operations to try to correct the problem. This time, the surgeons are removing muscle from her back and sides, and transplanting them to her abdomen in order to form an abdominal lining that will not tear. They will cover the whole thing with a mesh for added stability.

It's a complicated and dangerous procedure and I would like to ask everyone to remember Annie this Tuesday by sending your prayers, positive thoughts, good vibes, etc, to both Annie and her husband Tin Man. Trust me, she's one of the good'uns!

She has a good attitude going in. She said, "the best part of the operation is that I get a 'tummy tuck'!"