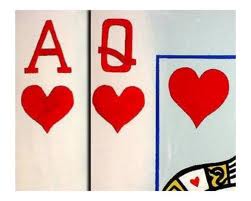 We had a light turnout for Tin Man's $5 NLHE Tourney, with only six runners showing up. Each of us threw in our $6 ($1 for the bounty), and the cards were in the air a little after 8 o'clock.

Philly Phanatic's daughter, City Girl joined us for the first time in a year or more. She's a lot of fun to be around, has a great sense of humor, and is a damn fine poker player. It wasn't her night however, as her dad busted her in sixth place. Philly also felted Ranger Rick in fifth, and yours truly got toe-tagged in fourth by Lil' Annie Okie.

I made a couple of blunders that led to my early exit. Philly limped from UTG, as did Tin Man, and I raised 3x from the BB with K-Q. Philly mucked, but Tin Man called. We saw a Q high flop and Tin Man bet 1/3 pot and I called, thinking I was probably ahead in the hand. When he checked the turn, I was almost sure I had him. A harmless river card fell and I bet 1/2 pot, with Tin Man making the call.

That cost me over half my stack. When he called my river bet, I was afraid he had backed into two pair, but since he didn't raise preflop, I wasn't expecting A-Q.

My second mistake was open-pushing from the SB with 5 1/2 BB. My error was not knowing how few chips Ranger Rick had. Rick was the BB and had 3 BB in his stack, so obviously his calling range would be very wide. Sure enough, he called with K-4 and I timidly tabled my Q-2. I didn't improve and was severely short stacked (yeah, that's what she said), and was out a few minutes later.

Lil' Annie Okie and Tin Man chopped the prize money, and Tin Man won the bounty by knocking out Philly.

I did a little better in the $2 buy-in cash game, picking up pocket aces twice and getting paid both times. By the time we called it a night a little before midnight, I was up $5, netting me a $1 loss for the evening.

I guess that means my winning streak is over, but $1 is a bargain for an evening of poker with good friends : )

Till next time, win the flips.
Posted by Lucki Duck at 4:26 PM