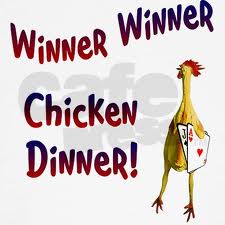 We had another light turnout for Tin Man's $5 NLHE Tourney, with only five runners making an appearance. The small field is getting to be a concern.

Big Daddy and Philly Phanatic got into a big hand early, which ended when Philly pushed all-in on the river with his pocket 10s. Big Daddy had hit top pair (jacks) on the turn and made the call, crippling Philly, who got felted by Tin Man shortly thereafter.

As the blinds increased, Tin Man became short stacked and pushed all-in for 2 BB and got calls from both Big Daddy and myself. Big Daddy turned a straight and bet out. I mucked immediately and Tin Man tabled pocket 9s and was drawing dead.

Not much later I felted Big Daddy when I turned a straight and was called by his second pair, and I was heads-up with Lil' Annie Okie. The very first hand I looked down at QQ and min raised. Annie three bet me by pushing all-in with QJ and was drawing thin. The flop brought three spades and Annie's J was a spade. I had her covered however, because one of my Q was a spade. The turn was a blank, but the river completed the flush for both of us and I took down the first place prize plus the bounty. Nice.

In the $2 buy-in cash game I was on fire. It was one of those times when it seemed like I was hitting every flop and all my draws were hitting. I felted Big Daddy on three occasions and walked away with a $16 profit. Added to my tourney win, I walked away with a $32 win. Gotta love that!

Next Friday is round two of our Vegas Or Bust Poker League and I think we are all looking forward to it. Hopefully, I'll have a post explaining how I won the tourney this month : )