Obama- A "One And Done" President 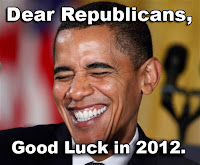 This is not a political post, but rather a "sports bet" one, if you will.

Intrade is currently listing President Obama's chance of being re-elected as 54.1%. You can currently buy shares of the President at $5.41 each, or sell shares (short them) a $5.40. Intrade works just like the stock market, except each decision you make is proven completely correct or totally wrong. For example, if Obama is re-elected this November, each share will be worth $10 ($10 = 100%) or $0 if he loses. That doesn't happen in the stock market, unless a company goes out of business, so place your bets!

Are you familiar with the "Bread and Peace" Model? Formulated by Douglas Hibbs, it's an accurate predictor of the results of presidential elections in a two party contest. The model only looks at two areas, per capita real personal disposable income (RPDI) growth and the number of American military fatalities in foreign conflicts during the President's term.

Using Hibbs' "Bread and Peace" formula as of October 2011, it looks like President Obama is in trouble, with only a 44% chance of re-election. In fact, PCRI growth must average at least 4% per year over the last four quarters of Obama's term for him to win another four years. And the odds that there will be a recovery that is strong enough? Here's Hibbs' take on it.


If the US economy gets into robust recovery mode, real income growth could be high enough to secure the President Obama’s re-election. However, the pace of recovery from the 2008 Great Recession remains sluggish, and the famous 2009 book This Time Is Different: Eight Centuries of Financial Folly by Reinhart and Rogoff documents that recoveries from contractions originating with the bursting of speculative financial bubbles are not V-shaped as in garden-variety recessions, but instead are typically prolonged U-shaped affairs lasting 5 to 6 years. The statistical properties of the time path of US per capita real disposable personal income indicate that the chances of year-long quarterly growth rates on the order of 4% or higher are no better than 1/7.

So we have an incumbent President with a 44% chance of re-election. The chances the economy will improve fast enough to save him are 1 in 7. Intrade has him at a 54-46 favorite to win.