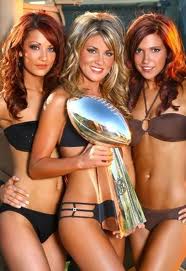 Conference Championship Sunday. The Giants travel west to San Francisco in search of gold and a ticket to the Super Bowl. In the AFC, the Pats host the Ravens.

I think the NFC game basically comes down to Eli. Both teams have excellent defenses and decent running games. NY has better receivers, but the Niners are a little better on special teams. So it comes down to the quarterbacks and Manning is the better of the two QBs. Alex Smith has had an above average year, but Eli has been hotter than a $2 pistol lately. The rub is that you never know whet you're gonna get with Manning at the helm. He could throw three interceptions as easily as he could three touchdowns. So I think I'll pass on this one.


Brady versus Flacco. Who would you take. Yeah, the Raven defense is better, but New England's QB is light years ahead of Flacco. Plus, the Pats can see that window of opportunity closing and I don't think they'll allow anything to get between them and another Super Bowl. I got in early at 6 1/2, but I'd still take New England at 7 1/2.