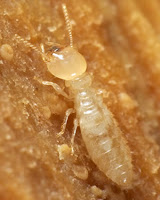 Again. We had termites a year ago and had Ladybug Pest Control come out, pull our carpet up in the infested area, drill a couple holes in the foundation, and pour the poison on 'em.

Apparently, it just pissed them off.

So round two is scheduled this week. Hopefully, it will be a KO this time and not just a standing eight count.

Finally got back on the virtual felt after not playing for a few days. I played 13 tourneys of the $6-18 man variety and final tabled 12 of them. Unfortunately, I only cashed in four and ended the evening a $7 loser. Meh.

One interesting hand happened in my final set. One opponent, obviously a graduate of lightning's "Donkey Man Coaching" school, open pushed UTG for 50BB ($1500 at the $15-30 level). He did it again a couple hands later and I was holding A-K soooted. I don't usually play for all my chips this early, but he had already proven he was a wild card. I figured at worst I was flipping, and more than likely I was ahead, possibly even had him dominated. If I didn't take his chips, someone else would. And soon.

Till next time, win the flips.
Posted by Lucki Duck at 9:28 AM