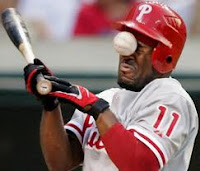 Nothing quite like getting skunked on your first post. The Angels and Red Sox both lost straight up, but I thought I had one in the bag when the Cards had a 6-0 lead in the eighth over my anemic Astros. That was before the bullpen gave up five runs in the last two innings. St Louis still won, but didn't cover the 1.5 run spread. Thank guys, nice job.

They say that the definition of insanity is doing the same thing over and expecting a different result. I must qualify, because I'm going with the Red Sox and Cardinals again today.