We began our last full day at Ellis Island, a small casino on Koval, which is a block off of the strip. We discovered the place years ago when we learned of an off-menu $4.99 steak special. For the price you would get an 8 ounce sirloin, potatoes with gravy, green beans, a salad, and a beer (or root beer) that is brewed in their on site microbrewery. Times have changed and the special is now $8.99.

I blame the terrorists. 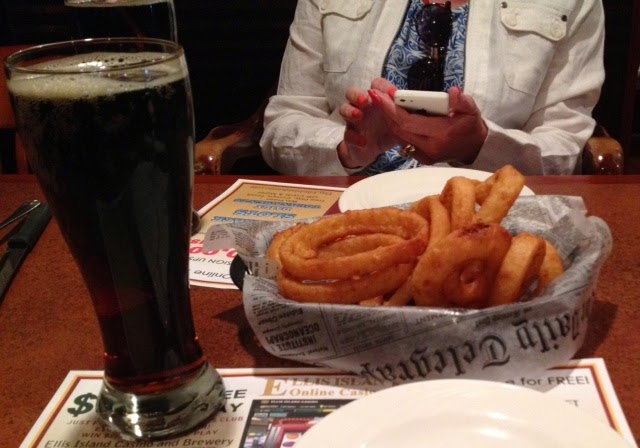 Ms. Duck had been craving a tall glass of their cold root beer, so we had a couple glasses with our lunch. We then drove out to the outlet mall near the airport, where Ms. Duck purchased some shoes and I found a couple of golf shirts. 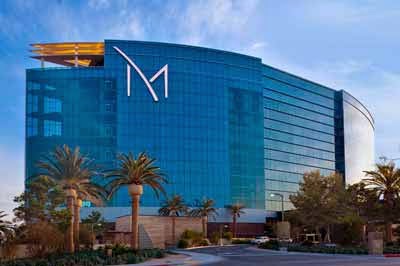 From there we drove out to the M Resort, which is an upscale resort well off the beaten path. The casino has a nice vibe to it and we always make it a point to visit there each time we're in Vegas.

We settled on a couple video poker machines and started looking for a waitress, when we hear an announcement for a free slot tournament that day. All that was required was collecting 250 player points that day, which is easy to do. I got my two-fiddy and headed over to take my shot. First prize was $2,000. Not bad.

After spending most of the afternoon there, we headed back to the strip and decided to play at Ballys. We noticed the long moving sidewalk that brings you in from the strip had been removed. New and better things are coming. I always thought it was a waste of prime space and the Ballys folks must agree.

I was ready for some poker, but had trouble finding the poker room. As was the case at Harrah's they had moved it, but I was able to finally sniff it out.

I had one memorable hand during the session, entering a multi-way limped pot with 5-2 of spades. Five of us saw a J spades- A spades- 3 diamonds flop. The first player bet $15 with everyone folding but me. Now heads-up, I turned my flush when the 4 of spades hit the felt. My opponent threw in $20 and I once again smooth-called. I thought about raising him, but I had a shot at a straight flush ($200 high hand) if the 3 of spades showed on the river and didn't want to miss a chance to draw at it. 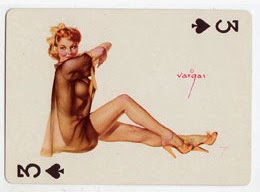 I almost jumped out of my chair when the dealer flipped over... the three of spades!

There was a $65 tournament cranking up that I had entered, and I almost missed the start of it waiting on my chips. I finally got them, tipped the dealer $30 (is that too much?), and headed over to the tournament tables.

There were 28 in the tourney and we were down to 16 when the short-stacked UTG player shoved for 3BB. I wasn't a lot better off with 7BB and peeked down at pocket kings. I never get K-K without thinking of Rob and his feelings towards the cowboys. Of course I also shoved and was called by the BB who had Q-8 of hearts. 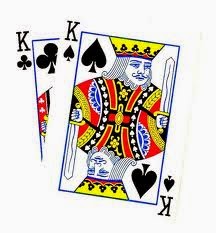 Well, Rob knows how this is gonna go, but I'll bore you with the details. Two hearts on the flop, one on the turn, and the worst hand going in was the best one when the dealing was done.

I did have another shot at a straight flush when I flopped an open ender, but didn't connect.

I headed for a bathroom break during the game and noticed someone at one of the $1-2 tables that had a remarkable resemblance to Grrouchie, but I wasn't positive it was him since he has lost a lot of weight since I had seen him. I immediately started searching for Pittsburgh Steelers references and noticed the vile Steelers tattoo on his arm.

We were able to visit for a few minutes and talked about his young marriage and how excited he is about their expected child. I also offered to recommend someone who could cover up the tattoo with the Blue Star, but for whatever reason, he didn't seem interested.

I have gotten used to meeting up with fellow bloggers for a meal of cards when I come to Vegas and that hadn't happened this trip, so it was nice running into a friend.

Ms. Duck had driven the car back to the Vdara hours ago, so I had to hoof it back when I finished at Ballys. By the time my head hit the pillow it was after 4am Texas time, and we had a full travel day ahead of us.

I remember thinking before I went to sleep, "Hope I can sleep on the plane."