After a long day of poker on Sunday, I decided to take a break on Monday and chauffeur Ms. Duck.

We had played at the Silverton on a previous trip and enjoyed it. It's a small property, with a huge Bass World store hooked onto it and an impressive aquarium at the edge of the casino. We had some success during our earlier visit, I had even won a poker tournament there.


The sportsbook was humming with World Cup action, but I know little about kickball, so I stuck to America's pastime and put a Benjamin on Oakland to beat the Rangers, giving a run and a half. As it turned out, the Rangers hung 14 runs on the A's. I lost internet access (my laptop, not the Vdara) the remainder of the week, so I was unable to research any games and this ended up being my only bet of the trip.

Ms. Duck and I played some video poker and penny slots, while we reduced the Silverton's inventory of tequila and rum. After a couple hours of play we stopped to eat at the buffet. The food wasn't memorable, but it wasn't too bad, and we got a discount for surviving on the planet for over 50 years. A door prize if you will :) Anyway, the meal was $5 each. Not bad.

After a quick walk through Bass World, we hopped in the car and drove downtown, valeting our ride at Main Street Station.

If you never visited MSS, I highly recommend it. It's an older hotel/casino, with beautiful stain-glassed windows and priceless antiques in the lobby area. You can also pee on a big chunk of the Berlin Wall in one of the bathrooms in the casino. There are several urinals mounted on the wall. Interesting. 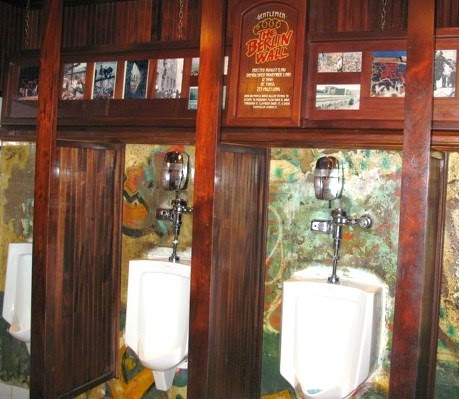 After playing for a while there, we took the skywalk across thru the Californian, stopping along the way for a scoop or two of some Lappert's ice cream, then walked the block over to Fremont Street. 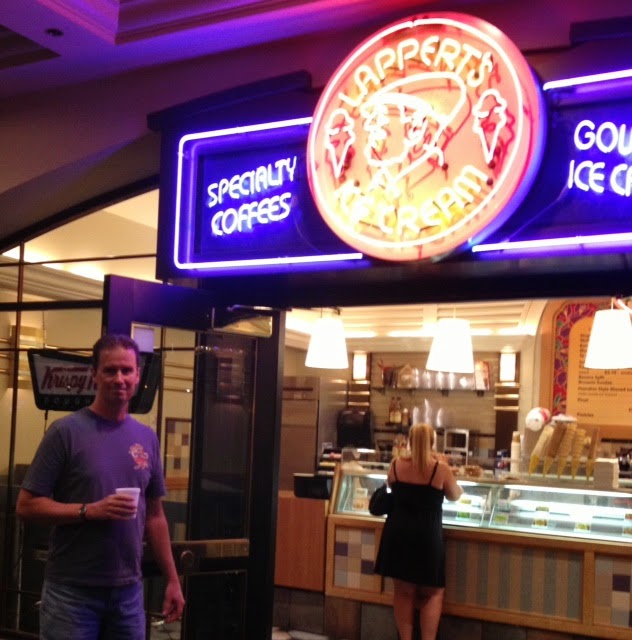 Fremont was bustling as always, with several characters offering to pose for a picture with you...for a price. Also, the street artists were setting up for the night ahead, but the female "independent contractors" hadn't made the scene yet.

We walked up and down Fremont, playing for a few minutes in a couple places and ended up in the Plaza, where we ran into this.

We both were getting hungry and had heard how good the Hash House was, so we decided to eat at the one housed inside the Plaza. We had been warned how large the portions are, so we split one meal, which turned out to be a good decision. I don't know many folks who could throw a whole meal down their neck at the Hash House!

We made the short walk back to Main Street Station, picked up our car and called it a night.

We had a 2 for 1 coupon for the buffet at the Aria, so we began Tuesday with a brunch there. The food was decent, but not exceptional, but the desserts were! Oh. My. Goodness.

After filling our tanks, we took the tram to the Monte Carlo. I was ready to play some live poker, and Ms. Duck likes their casino, so it was a perfect choice.

I joined the $2-6 spread limit game while waiting for a seat at the $1-2 table. After an hour or so, they finally opened another NLHE table and I got a seat, walking away from the limit game with a $40 profit.

I had two memorable hands at the $1-2 table.

In the first hand, I raised to $12 from UTG +1 with pocket aces after one limper had entered the pot, and got two callers. The K-T-6 rainbow flop looked harmless, so after the UTG player checked, I bet $25. One player folded, but the UTG called. A harmless 3 fell on the turn, and my $40 bet was check-called. Another 3 on the river brought another check from my opponent. I felt my two pair was good, so I bet another $60, and the villain push all-in. I had around $125 behind and he had me covered. He had played decent poker since we sat down, so I didn't think he was getting cute. It's possible he had a king, and the river had given him two pair and improved his kicker. But my mind kept coming back to pocket sixes. The way he played the hand, it was the only thing he could have that made sense.

A better poker player than I would have had the discipline to fold. It's one of those situations where you know you're beat, you just don't want to believe it. So I called. And he showed me 6-6.

In the second hand I had J-J and thought of the old adage, "There are two ways to play jacks, and both of them are wrong." I open raised to $10 from middle position and got one caller and then a 3 bet from the BB. He had been playing wild and loose, so I didn't put much stock in his raise and called the extra $12. After the original caller folded, we were heads up and saw an A-J-8 flop. A set! Woo-hoo!

"Wild Thing" bet and I set my trap by smooth calling.

"Gonna get that first buy in back on this hand," I was thinking.

A ten on the turn brought another bet and I again called.

The river wasn't scary, so when Wild Thing bet, I pushed all in for an addition $100.

"I call," he said, showing pocket aces for set over set.

I did manage to grind my way back to double my last rebuy, but still left the room $200 lighter.

Ms. Duck had text me earlier that she was picking up dinner at Subway and heading back to our room. Brunch had been a long time ago, so I made the walk to the tram and also headed back.

Another fun (but expensive) day in Sin City.