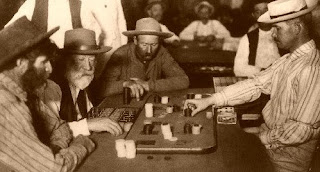 I had a good week at the poker table last week, winning $22  at my home game on Thursday, then following that up with another $12 win on Friday at Tin Man's.

We only had six for our Pokerpalozza at the Duck Blind. After a slice or two of pizza and a brownie for dessert, we started tossing cards at seven. Seated around the felt were Dealer Larry, Ollie the Accountant, Glass Man, Stamps, J-Dawg and your humble scribe.

J-Dawg took home the High Hand Jackpot with quad 7s in our $20 buy in, dealer's choice, limit game. He and I were the big winners on the night, with Glass Man and Dealer Larry taking it on the chin.

We had five show on Friday for Tin Man's $5 buy in NLHE Tournament. Flyboy joined us for the first time in a while, with Philly Phanatic seated to his right, followed by Lil' Annie Okie, Tin Man, and Lucki Duck.

Philly was the first to fall on his sword when Flyboy called him with only a draw, but it hit and Philly was done. I had a good run of cards when it counted and managed to run the table, knocking out Flyboy, Tin Man, and finally Annie to take down first place.

The cash game was short handed, with only four of us. I managed to win another few bucks to end a profitable week playing cards.

Our Vegas or Bust Poker League's monthly tourney is this Friday. It will be the eleventh of sixteen during league play, with the top two finishers winning seats to the 2013 WSOP. Right now I'm in first place with a decent lead on third place. As we get closer to the end of the league, I have to admit that I'm getting a little excited about how I might be spending part of next summer :)

Till next time, win the flips.
Posted by Lucki Duck at 8:00 AM