We had eight players last night for our Pokerpalooza at the Duck Blind last night. Bobby Dee brought burgers and chips for the occasion, and M2 baked another cake.

The dog on the cake is a facsimile of our family canine Kramer. He's a terrier/ Heinz 57 mix that my daughter brought home from "Fuzzy Friends," which is our local animal shelter. Kramer had suffered some abuse from his previous owner, so he was very skiddish when we got him, but he's mellowed out well over the past few years and enjoys hanging out by the poker table waiting for a pat on the head or a morsel off the night's menu. 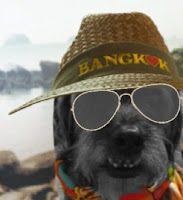 Here's a picture of him on his recent vacation to Bangkok. I think she captures him well with her cake depiction :)

Ollie the Accountant came out on top of the money pile, winning $17 in this $20 buy-in, dealer's choice limit game. Cell was close behind, winning $16, followed by moi with $10. Bobby Dee was the only other runner that finished in the black, posting a small $5 profit.

J-Dawg lost $7, Gentleman Jim $14, with Glass Man getting hit the hardest, dropping $19 on the evening.

Stamps won the High Hand Jackpot with a straight flush to the jack in a hand of Omaha High, but still walked away with a small loss.

It looks like our Friday night game is cancelled again this week, as Tin Man and Lil' Annie Okie are heading for the coast to participate in a fishing tournament.

I did get some good news concerning one of our regular players from the Friday game. You may have noticed (or not) that I haven't mention Bluffin' Bev in quite a while. Bev has diabetes and is also on dialysis due to poor kidney function. Everything came crashing down health wise several months ago and Bev has spent that time shuffling between rehab and ICU as her condition changed.

I had called several times for updates, speaking with both her husband and daughter. Bev was in an Austin rehab facility for a while, then was transferred to a Ft. Worth facility, and finally sent to a facility in Temple, which is about 30 minutes south of Waco. I have been unable to reach Bev's family for the past six weeks. When I called I would get a message that the phone had been disconnected. I was worried and even started checking the obituaries, hoping she wouldn't be listed.

Last Sunday I got a call from Bev! She said she had finally gotten to come home the previous Friday. Was I ever glad to hear from her :) She said that she was unable to walk without the assistance of a walker, and even then just for short distances. She starts a rehab program designed to get her back on her feet this week.

"I'm not able to play poker with you guys yet, but it won't be long!" she told me.

"That's great," I said, "We've missed your money!" And she laughed the great laugh I've missed these past few months.

Isn't it funny that no matter what the situation, poker players can still give each other crap.

If you're reading this Bev (and I know you sometime read my drivel), welcome home! I can't wait to see you seated around the table again.

Till next time, win the flips.
Posted by Lucki Duck at 9:20 AM