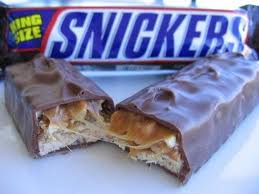 We had a nice turnout last night for our Pokerpalooza, with 10 runners taking a seat at the obround table. Bobby Dee brought some fried chicken (with sides) and M2 (my daughter) baked some "Snickers" brownies for dessert. If you left hungry, it was no one's fault but your own.

This was M2's first attempt at Snickers brownies, and probably wouldn't have happened this time if we didn't have such a big stash of them. You see, Mars Snackfoods has a manufacturing plant here, and they donated 1,500 Snickers candy bars (king size) for our Sertoma Kitefest. We gave out 1,300 of them, and M2 was given the remaining 200 after the event ended, which she brought home. So, we're up to our azz in Snickers bars and looking for ways to dispose of them. I'll probably run them down to our local food bank this weekend.

I won a small pot early in our $20 buy in, dealer's choice limit game, and it was the first of only two I won the entire evening.

Ray-Ray was seated to my left, and he had a break-even night, finishing with a small profit. Cell was the big winner on he night, cashing out for $48, followed by Stamps (Cell's dad) with $42. J-Dawg won $6, Dealer Larry $1, with Bobby Dee, Farmer Harry, and Glass Man each dropping around $5 a piece. Gentleman Jim and myself both left bruised and battered, losing $27 each. Ouch!

Cell also won the High Hand Jackpot with aces full of jacks in a hand of Omaha High. I don't know exactly what was going on with him, but he left the table 5-6 times to field phone calls during our three hour game. Stamps figured it must be "woman problems." I guess we've all been there, right?

Friday will be our fifth of sixteen league tournaments in our Vegas Or Bust Poker League. The top two finishers at the end of the league will win seats to the 2013 WSOP. Right now I'm in first, but there's a long way to go. I expect to post a report on the tourney sometime this weekend.

Till next time, win the flips.
Posted by Lucki Duck at 8:50 AM