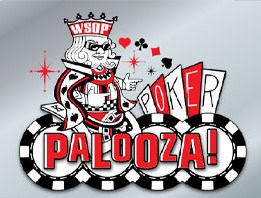 We had 10 runners show for our Tuesday night Pokerpalooza. Stamps brought a nice sized brisket that he had smoked. Add a hamburger bun, pickles, onions, and some barbecue sauce and you have the makings of a pretty good sammich. A few potato chips on the side and chocolate chip cookies for desert completed the menu.

Stamps won the High Hand Jackpot for the third week in a row, this time with quad nines in a hand of Omaha, and finished with a nice $22 profit on the evening. Cell also won over $20 in this $20 buy-in, dealer's choice limit game. Dealer Larry finished with a $16 profit, but I managed to win the most, walking away $47 to the good.

I started slow and was down about $6 early in the evening, but then the deck started hitting me in the face. A few draws hit for me and there were several times I made a crying call, only to win the pot. I sniffed out a bluff from Jim, when he represented top pair, but I called him down with second pair and took down a nice pot. It was one of those nights where everything worked. It felt good, as it had been a while since I had won big in the Pokerpalooza game.

Hope it keeps going next week :)