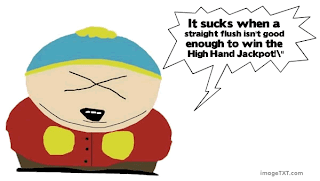 I've played poker on a regular basis for eight or nine years and have never seen as many big hands as I did last night at J-Dawg's Poker Extravaganza.

Ray-Ray started the festivities early by hitting a straight flush to the ten in the first half hour of play in this $20 buy-in, dealer's choice limit game. We all assumed he had the High Hand Jackpot wrapped up for the evening. But, as Lee Corso likes to say, "Not so fast my friend!"

A short while later, Farmer Harry hit quad tens in a hand of Omaha High, but it wasn't good enough to win the HHJ. Neither was Gentleman Jim's quad fives or Harry's quad fives. J-Dawg rivered a straight flush to the eight in another hand of Omaha, and as he tabled his winning hand said, "It sucks when a straight flush isn't good enough to win the High Hand Jackpot!"

On the very last hand of the night I was UTG and peeked down at Qc-3c-Td-6d and decided to limp, only because it was the last hand. The flop was 7d-8d-9d.

The turn brought the 5d, so now I had a six card straight flush. I apologized to Ray-Ray as I tabled my hand, which meant he now was splitting the HHJ with moi. For some reason, I was happier about the split than he was. Go figure : )

I still managed to drop $3, even counting half the jackpot I won. Bobby Dee and Farmer Harry were the big winners, with both cashing out with$30+ profits. Ollie the Accountant and Stamps took the biggest hits, with both dropping north of 20 bucks on the evening. J-Dawg lost a little, as did Dealer Larry and Jim.

Tin Man's Tournament is tonight. Hopefully, we'll have a better turnout than we did last week.

Till next time, win the flips.
Posted by Lucki Duck at 9:27 AM