J-Dawg's Poker Extravaganza- The End Of An Era 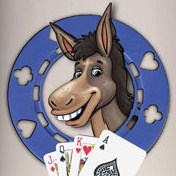 We put J-Dawg's Poker Extravaganza to bed for good last Wednesday. His house sold and he has to be out by the 30th, so the festivities will move to my place until further notice.

I was off to a quick start, winning two of the first three hands and managed to hold on for a slight profit of $6 on the evening. Cell had a wild ride, losing over $30 before rallying late and finishing with a $7 win. Farmer Harry was the big winner on the evening, his chip stack boosted by winning the High Hand Jackpot with quad nines. Ollie the Accountant and Dealer Larry took the biggest hits with both losing almost $20 each. J-Dawg, Stamps, Ray-Ray, and Gentleman Jim all walked away pretty much even.

I'll miss our weekly games at J-Dawg's, mostly because moving the game to my house means more work for me getting everything ready. At least I finished on a winning note :)

We had five runners show for Tin Man's $5 NLHE Tourney on Friday. Tin Man and I decided to chop the prize money when we got down to heads-up play, with me taking the bulk of the money because of my 3-1 chip advantage. Music Man showed up for the first time in quite a while and it was good to see him again. He was excited that one of the jingles he and his band had composed was going to be used on one of Obama's campaign commercials. So, kuddos to the Music Man!

I played loose and aggressive in the $2 cash game. I had some wide swings, but when it was all said and done, I ended with a $1 profit. But, added to my tourney winnings, it was a good night. Big Daddy was the big loser for the night and Philly Phanatic also took it on the chin. Music Man and Tin Man were the big winners, both booking $15 profits. Hopefully Music Man will be back again soon.

Till next time, win the flips.
Posted by Lucki Duck at 9:31 PM