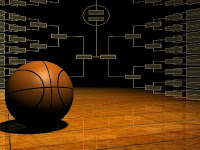 You may have noticed that the "sports betting" division of Small Potatoes has been inactive since the Super Bowl. Now that one of the year's biggest sporting events is in full swing, you're probably thinking, "I bet Lucki Duck is gonna post some juicy picks for the basketball tournament!"

And you would be wrong.

Neither basketball or hockey (pro or college) interest me very much. I'll watch an occasional game if there's a team I'm interested in. For example, I've watched most of only one NCAA tournament game, and that was the local college (Baylor). Should I be in front of a television while the Bears (or Lady Bears) are playing, I'll probably watch. Otherwise, I'll be tuned into Storage Wars, American Pickers, Pawn Stars, or something similar.

Because my interest in both winter/spring sports is minimal, my knowledge reflects it. So, why throw money at something I know nothing about?

For now, no picks. But baseball season is just around the corner and the sports betting division will come out of its hibernation. Stay tuned, fun times are ahead : )
Posted by Lucki Duck at 1:04 PM