Hot Streaks; One Ends, One Continues 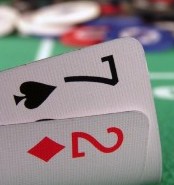 Both are good things.

We actually had some cloud cover today and our consecutive 100 degree days ended today at 44. Whew! Tomorrow's forecast high is 105, which will bring us within one for the most 100 degree days in a summer in cenral Texas, which is 63.

I was able to keep my streak of consecutive wins at Tin Man's $5 NLHE Tourney by shipping the tournament for the third week in a row.

We had nine runners show up to pitch a few cards. Philly Phanatic was seated to my left, followed by Lil' Annie Okie, Tin Man, Joel (new player), Bluffin' Bev, Josh, Misty (new player) and Ms. Lucki Duck. I was card dead for the first hour and a half and found myself down to five BB. I shoved with pocket sevens and doubled thru Joel. With blinds ay 10-20, I pushed with A-Q and picked up the blinds plus one limper when they all folded and suddenly I had a fighting chance!

I busted Ms. Duck on the bubble (again) and it was down to Philly, Josh and myself. Blinds were up to 50-100, and with only 900 chips in play, we were basically down to a game of bingo. I was the big blind, with Philly limping from the button and Josh completing his small blind. I looked down at the hammer and checked. The flop was A-7-2 rainbow. I checked behind Josh, hoping Philly would try to buy the pot with a position bet, but he checked. The turn was another 2 and I bet the minimum $100, but both opponents folded. But boating up with the hammer was sweet!

Josh and Philly got into a pissing contest on the next hand, with Philly busting in third place. I won a couple of hands where I was a 3-2 favorite (it actually held up both times) and it was over. We'll have to see if the streak will live for another week next Friday.

Things didn't go quite as good in the $2 buy-in cash game as I ended up losing $3. However, Ms. Duck did well and cashed for a $6 profit. Since Texas is a community property state, I guess you could say I came out a winner there too!

Till next time, win the flips.
Posted by Lucki Duck at 9:59 PM